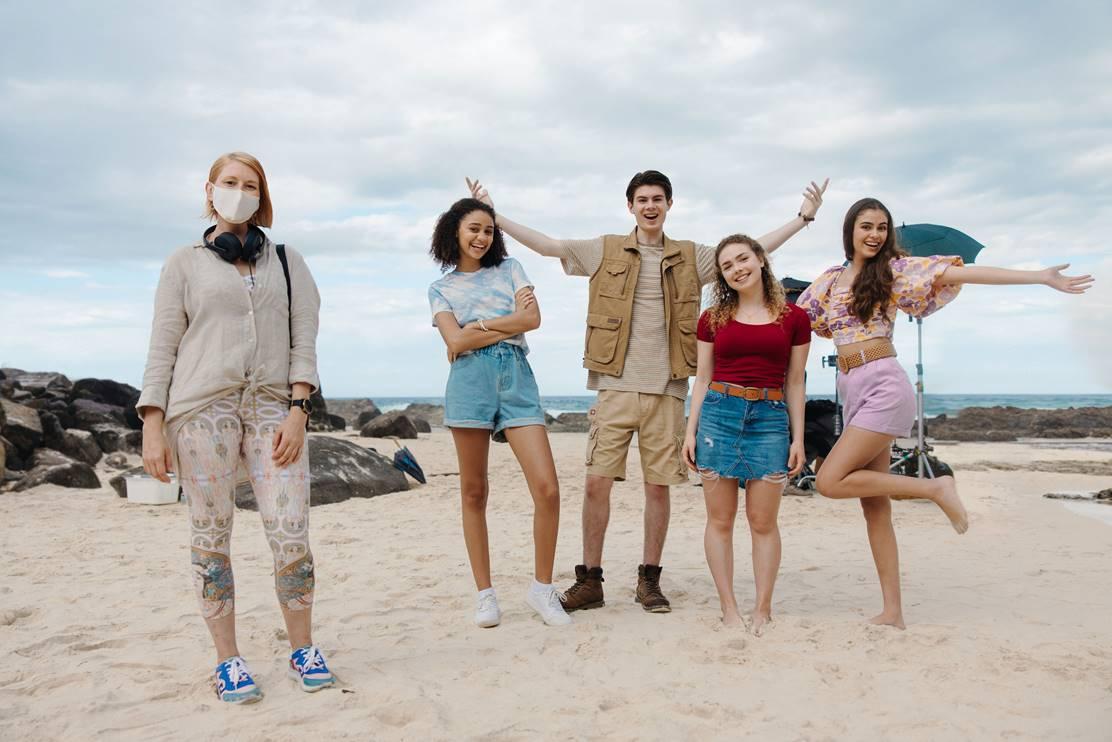 Filming has commenced on the latest feature film aimed at tweens from The Steve Jaggi Company, The Mystery of Dolphin Bay, with US actor Izabela Rose (Upside-Down Magic, Secrets of Sulphur Springs) starring in the lead role. The film is shooting in Brisbane and on the Gold Coast and is written by Jacob Stock. Christine Luby (This Little Love of Mine, Dive Club) is directing.

The Mystery of Dolphin Bay follows 15-year old Quinn Perkins (Izabela Rose), who is ecstatic to be spending the summer working as an intern with her best friend Daniela (Ella Proberts) and marine biologist father Charlie (Rowan Chapman). The besties haven’t seen each other since Daniela moved to Dolphin Bay, Australia, where her father Charlie inherited a research centre. When Quinn arrives, she is surprised to learn that there are other interns joining them – Daniela’s new best friend Jennifer (Allegra Teo), and the adventurer wannabe Teddy (Jayden McGinlay).

Quinn is thrilled to be researching the reef’s unnatural shift in biodiversity, but things feel different between Quinn and Daniela, and it’s not long before Quinn agrees to join Teddy on a treasure hunt as a distraction. Mysterious events start to occur, and the teens assume that they are being haunted by local legend Everly Fallow. After receiving Everly’s journal from his daughter, the teens discover a treasure map and must work to uncover the truth about the mysterious Everly Fallow and what or who, is responsible for the problems on the reef.

Izabela Rose comments “I’m excited to be out of quarantine, and filming here in Queensland. I can relate to my character having to fly to the other side of the world for a new adventure, and I can’t wait to see what the next few weeks has in store for me.”

Director Christine Luby comments “With themes of environmentalism, friendship and mystery, the scene is set for this wonder-filled story set here in Australia. For me, it’s the spirit of independence that drives the story along. The ways in which our young characters rely on their instincts and never give up, is a great message for audiences, and I’m thrilled to be working on this project.”

Producer Steve Jaggi comments “It’s fantastic to be back here in South East Queensland shooting our next feature film. The Gold Coast is the perfect location to create our fictional Dolphin Bay setting, and the region has everything on offer that we could need for the shoot. We’ve assembled a talented young cast led by Izabela Rose, and I’m looking forward to seeing our cast and crew bring this intriguing story to life.”

The Mystery of Dolphin Bay is produced by Steve Jaggi and Kelly Son Hing, with Kylie Pascoe co-producing. Executive Producers are Larry Grimaldi, Hannah Pillemer and Fernando Szew for MarVista Entertainment and Lee Matthews. Athabasca Film will manage the domestic theatrical release, while international sales and distribution will be handled by MarVista Entertainment out of Los Angeles, California. The Mystery of Dolphin Bay is financed with the assistance of Different Films and Asia Pacific Film Investment Group, with the support of Screen Queensland.