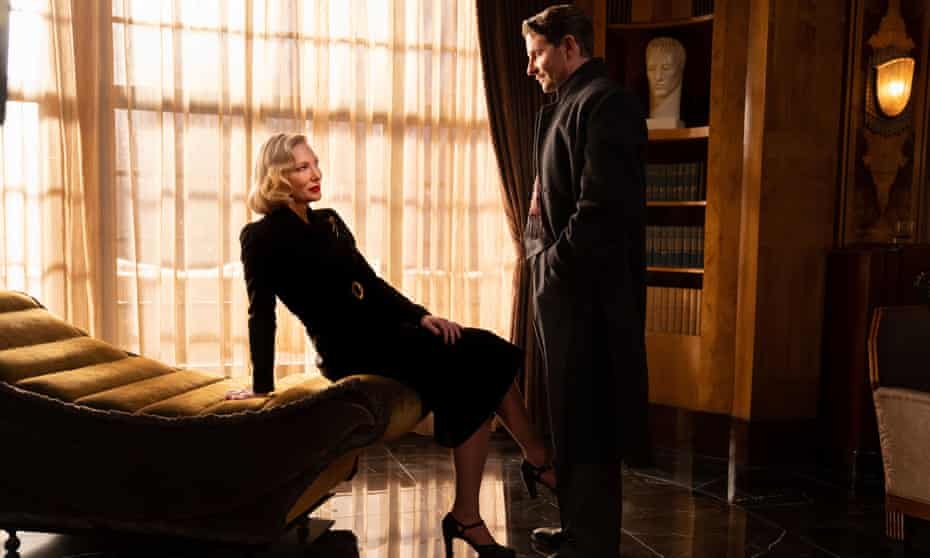 Summary:  An ambitious carny with a talent for manipulating people with a few well-chosen words hooks up with a female psychiatrist who is even more dangerous than he is.

I am probably committing a sin against cinema by admitting this but I have never really been someone that has fallen for the whole ‘del Toro is one of the greats film directing’ claim. Sure he has made a couple of films that I have enjoyed but I stand by my claim that The Shape Of Water is one of the most over-rated films to ever hit cinemas and I will never really forgive him for making me endure Pacific Rim.

But something sparked inside of me when I saw the trailer for Nightmare Alley. There was something about this film that seemed appealing to my inner film geek. It looked dark, it looked slightly Gothic in theme and it seemed to remind me of one of my favourite TV shows – Carnivale. I was more than willing to take a look at the film off the back of what had teased me and I am so glad that I did.

Nightmare Alley centres around Stanton Carlisle (Bradley Cooper – A Star Is Born) a man who is left homeless and jobless after deciding to run from his past. His journey soon brings him to a carnival run by Bruno (Ron Pearlman – Hellboy), where he lands a job through Odditorium owner Clem Hoatley (Willem Dafoe – Spiderman) who quickly teaches him the secrets of the trade.

But it is the ‘grifting’ work of Zeena the Seer (Toni Collette – Muriel’s Wedding) and her husband Pete (David Strathairn – Godzilla) that captures Stanton’s attention and soon he begins to learn everything he needs to become a ‘psychic’ himself. At the same time Stanton becomes infatuated with the ‘electric woman’, Molly Cahill (Rooney Mara – The Girl With The Dragon Tattoo), and finds himself drawn into a new game thanks to psychiatrist Dr. Lilith Ritter (Cate Blanchett – Blue Jasmine).

My first thought when watching Nightmare Alley was the feeling of how epic it was. Not epic in the sense of a film like Lord Of The Rings but epic in its scale of storytelling. This is based on a novel from 1946 and you can feel that nostalgia rush through your body as del Toro creates a film that really is only comparable to Scorcese’s Shutter Island. No matter how much you enjoy this film there is something dark and sinister that bubbles along just under the surface the whole time you watch this film.

This is a film that tests your morals. The treatment of the ‘geek’ by Clem is horrendous and the fact that the rest of the carnival staff know about it means there is not really a redeemable one among the lot. Then there is the film’s hero, Stanton Carlisle, a man whom the audience is shown the dark sins of in the opening of the film and a man that you know will screw anyone over to live another day yet somehow del Toro presents him in the film in such a way that you find yourself siding with him. It is quite sick when you think about it but it also shows me that del Toro has learnt so much about good screenwriting over the years that he is now a pro who can easily control his audience like a puppet in a pretty remarkable way.

Del Toro and his cinematographer, Dan Lausten (The Shape Of Water), give this film the dark, foreboding look and feel that it deserves and needs. There is never a moment during the film when the audience gets a chance to relax, like the characters in the film they are kept on their toes as they never know what is around the corner when it comes to the plot or who is going to be played next. If having your emotions heightened during a film is your thing then this is certainly the film for you.

What I also found impressive with this film was the performances. Bradley Cooper is in career best form and he gets to play the anti-hero Stanton and his scenes alongside Cate Blanchett are some of the best ‘theatre’ that you are ever likely to see. The dialogue between the two is like cat and mouse and their scenes together are some of the cinematic highlights of 2022. Dafoe is also at his sinister best while Rooney plays the vulnerable Molly well and is never over-shadowed by the bigger names around her.

I never really thought that I would say this but del Toro has delivered a real masterpiece here. The film takes its audience down a haunted rabbit burrow that they are not likely to forget for a long time. The film is kind of left wanting during a dry middle act but it is bookended by some of the best cinema that you will see in 2022.