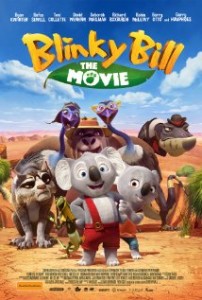 Summary: Blinky Bill (voiced by Ryan Kwanten) the mischievous koala is devastated when his father, Bill Koala (Richard Roxburgh) leaves their home town and goes exploring in the outback but hasn’t returned after twelve months. Despite promising his mother (Deborah Mailman) that he won’t Blinky heads off to look for him.

Soon Blinky is joined by an accidentally freed zoo koala named Nutsy (Robin McLeavy) and a crazy filled neck lizard called Jacko (David Wenham) as he battles the dangerous outside world in a bid to find his Dad. The journey is made even more dangerous by the fact that they are being pursued by a cranky cat (Rufus Sewell) who wants to make the koalas his dinner.

Blinky Bill is one of those children’s characters that never seems to go out of fashion. Created by author Dorothy Wall in 1933 generations of Australian children have grown up loving Blinky in the countless television shows, books and two movies that have told the larrikin koala’s stories over the years. Now in 2015 Blinky gets a resurgence and unlike so many other characters that have been re-invented for the kids over the years this is one character’s story that still holds up.

Aside from trying to make a character cool for the younger generation that has been around for over 80 years there are a few other hurdles that director Deane Taylor has had to overcome with Blinky Bill The Movie. First of all is trying to get kids who have grown up on the slick animation of Pixar to warm to a movie that uses some old fashioned style animation. The key it seems in this case was to come up with a story that transcends generations and here the filmmakers seem to have done that well. Not surprisingly when you consider that Taylor has worked on some legendary animation projects over the years including Popeye, Casper, The Flintstones, Pink Panther, Footrot Flats and Tim Burton’s The Nightmare Before Christmas the film does conjur up that simple old time animation story of a character on an adventure while being pursued by a character wanting to put an end to it – yes Sewell’s cat here is like the Will-E Coyote or Elmer Fudd characters of old.

Taylor brings a simplistic style to the film’s storytelling and it ends up working. To be honest there is nothing new here but for some reason the audience finds themselves barracking for the little koala and his friends and while some of the gags are a little childish there are some other humorous moments in there that are obviously designed to bring a smile to older audience members. Like the Ginger Meggs stories there are some things about Blinky that are a little questionable about whether today’s parents are okay with their children watching it but for the most part this is a fairly innocent film. Some serious issues around refugees and conservation does get a look in with the screenplay but just like Oddball this isn’t a film that you are going to walk out of and feel like you have been preached at with.

One of the obvious things about Blinky Bill The Movie is that this is a film that seems to be aimed at an international audience rather than just an Australian audience. The inclusion of big name actors like Toni Collette, Barry Humphries, Ryan Kwanten and Richard Roxburgh do give this film a lot of credibility while the inclusion of so many lovable forms of Australian wildlife could just give this film a life outside of Australia if it is marketed right.

Blinky Bill The Movie does nothing wrong. A simple story that has you barracking for the young koala as he outruns the villainous cat is very Looney Tunes like, while the script is smart enough to also include some touching moments about the relationship between a father and a son. Blinkey Bill The Movie is mainly for younger children but certainly won’t put an adult to sleep, it’s just innocent fun.