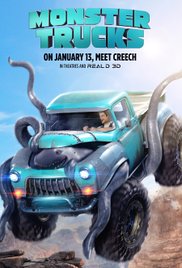 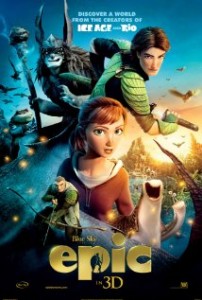 Summary: Epic is a CG action-adventure comedy that reveals a hidden world unlike any other. From the creators of “Ice Age” and “Rio”, Epic tells the story of an ongoing battle deep in the forest between the forces of good who keep the natural world alive and the forces of evil who wish to destroy it. When a teen age girl finds herself magically transported into this secret universe, she must band together with a rag-tag team of fun and whimsical characters in order to save their world… and ours.

Please check Greg’s review of ‘Epic’ that is available on www.filmreviews.net.au

Other Subculture Media Reviews of ‘Epic′: Please check Episode #38 of The Good The Bad The Ugly Film Show for more reviews of ‘Epic’. 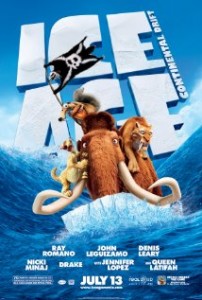 Summary: Scrats nutty pursuit of the cursed acorn, which hes been after since the dawn of time, has world-changing consequences a continental cataclysm that triggers the greatest adventure of all for Manny, Diego and Sid. In the wake of these upheavals, Sid reunites with his cantankerous Granny, and the herd encounters a ragtag menagerie of seafaring pirates determined to stop them from returning home.

While at times during Ice Age: Continental Drift it seems like the filmmakers behind the series have lost control of their storyline this still ends up being an enjoyable watch that will be loved by both kids and adults alike.

This time around sees Manny (voiced by Ray Romano – Sack’s West, TV’S The Middle) and Ellie (Queen Latifah – Joyful Noise, TV’S Let’s Stay Together) having some parental problems with their daughter, Peaches (Keke Palmer – Rags, TV’S Winx Club). Peaches feels she is old enough to her own thing while Manny still feels that she needs her parents around.

Meanwhile poor old Sid (John Leguizamo – One For The Money, Lincoln Lawyer) is having family issues of his own when his family stop by and dump him with the ‘burden’ that is Granny (Wanda Sykes – The Muppets, TV’S Futurama).

All those problems however seem petty when Scrat’s (Chris Wedge – Ice Age 3: Dawn Of The Dinosaurs, TV’S Family Guy) love for acorns starts a catastrophic shift of Earth that soon sees Manny, Sid, Granny and Diego (Denis Leary – The Amazing Spider-Man, TV’S Rescue Me) stranded on an iceberg while Ellie is left to the save the lives of all the other creatures.

To add to the drama Manny, Sid, Granny and Diego soon find themselves upsetting Captain Gutt (Peter Dinklage – A Little Bit Of Heaven, TV’S Game Of Thrones) and his crew which includes Flynn (Nick Frost – Snow White & The Huntsmen, The Adventure Of Tintin), Shira (Jennifer Lopez – What To Expect When You’re Expecting, The Back-Up Plan) and Raz (Rebel Wilson – What To Expect When You’re Expecting, Struck By Lightning)

At times it feels like screenwriters Michael Berg (Ice Age 3: Dawn Of The Dinosaurs, Ice Age) and Jason Fuchs (Rags, Pitch) have lost their senses by bringing pirates into the Ice Age franchise. The story doesn’t fit comfortable with fans of the franchise yet the duo put so much heart into the script, and a healthy dose of thrills that at the end of the day it doesn’t seem to really matter.

These screenwriters are so talented they also infuse some great lessons centered at teaching children to respect their parents in such a way that the message gets across loud and clear but never once seems preachy.

Ice Age: Continental Drift certainly isn’t the best film in this franchise but it is still an enjoyable watch.