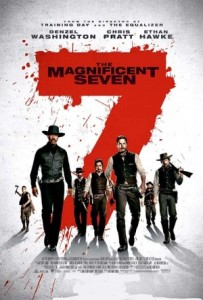 Summary: Seven gun men in the old west gradually come together to help a poor village against savage thieves.

OUR THE MAGNIFICENT SEVEN REVIEWS & RATINGS:

One question always has to be asked when a remake of a film surfaces… why was the remake made? Was it because a director thought he had a more creative or ‘modern’ way to tell the original story? Was it because a team of filmmakers thought that current day technology could improve on what was made decades ago? Sadly, none of these questions seem to answer that question about the remake of the legendary western The Magnificent Seven (which itself was a remake of Seven Samurai).

There are of course positives and negatives to this remake. One of the positives is getting to see Denzel Washington play yet another strong leading man, and I would be lying if I said it’s not great to see a big budget Western back on the big screen, hopefully this is a start of a lot more.

Sadly though the negatives outweigh the positives. While the film holds up its entertainment value and looks visually good the disappointing thing is that this is modern remake doesn’t offer the audience anything different to what we have been watching in this genre for the last fifty years. There’s no new tactical ways for a battle to be fought out or even any new creative ways to shoot the movie by Fuqua and his team.

The other big disappointment is the screenplay. While the film does at times raise the suspense and tension it misses other key moments that really could have made this a better film. It is really believable that a native American warrior would fight on the same team as a tribe hunter without any form of hostility or tension? Likewise there needed to be a better explanation to why Chisholm joins the fight in the first place… the explanation comes way too late in the film. Don’t even get me started on the weak CGI graves at the end of the film either.

Perhaps the biggest disappointment though is how the screenplay lets down the cast. Denzel Washington gets a chance to star in this film… the rest don’t. Chris Pratt is obviously there for comic relief (a hat that certainly doesn’t fit his character) and ends up just playing the same character he did in Guardians Of The Galaxy. The rest of the cast seem to end up playing clichés though with Manuel Garcia-Rulfo completely wasted in his role. The only other upside with the acting is with Emily Bennett who does more than enough to suggest that she can be a leading lady in the future.

The Magnificent Seven may be enough to entertain a modern audience and provide the odd bit of suspense throughout. But for seasoned fans of the Western genre the film offers nothing new and will easily be seen as a fair bit weaker than the original.

John Sturges’ classic 1960 western The Magnificent Seven made stars out of Steve McQueen, Charles Bronson and James Coburn (who all later appeared in Sturges’ epic WWII adventure The Great Escapein 1963). Sturges’ film was inspired by the Akira Kurosawa’s classic The Seven Samurai, regarded by some critics as the greatest action movie ever made. Kurosawa was inspired by the Hollywood westerns of the 50s, and, ironically, his film influenced many westerns that followed including the spaghetti westerns of the late great Sergio Leone. The 1960 film was a huge success and spawned a couple of sequels and even a short lived television series. And now we get this remake from director Antoine Fuqua (Training Day, Olympus Has Fallen, etc) who knows his western tropes and has in turn borrowed heavily from some the great directors of the genre, from John Ford through to Eastwood, Peckinpah and Leone.

It’s 1879. The small but peaceful farming town of Rose Creek is under threat from ruthless and greedy mining magnate Bartholomew Bogue (Peter Sarsgaard), a robber baron who is desperate to corner the market on all mining activities in the region. Anyone who opposes him is either viciously beaten or killed, and the megalomaniacal Bogue has assembled a veritable army of mercenaries and lawless types to enforce his will. But the newly widowed Emma Cullen (Haley Bennett, from The Equalizer, Hardcore Henry, etc) wants to stop Bogue. She approaches bounty hunter Sam Chisholm (Denzel Washington) and pleads with him to help. Chisholm agrees and sets off to round up an assortment of gunslingers to make a stand in what could well be a suicide mission. (Sounds familiar? It was a key plot device of films like The Dirty Dozen and the recent Suicide Squad.)

This time around the seven he assembles are a much more racially diverse bunch. Apart from Chisholm himself there is Faraday (Chris Pratt, from Guardians Of The Galaxy and Jurassic World), a wise cracking card sharp and gunslinger; the boozy Goodnight Robicheaux (Ethan Hawke), a sharp shooter who is still damaged by his experiences of fighting in the Civil War; his knife wielding offsider Billy Rocks (Korean action star Byung-hun Lee); the hulking John Horne (Vincent D’Onofrio, from Full Metal Jacket, etc), a renowned and feared Indian hunter; the Texican gunman Vasquez (Mexican actor Manuel Garcia-Rulfo); and the comanche warrior Red Harvest (Martin Sensmeier), who has been cast out of his tribe. This motley crew have just seven days to train the frightened townsfolk in the skills necessary to fight back against Bogue and to defend their village.

The build up to the key siege of the town is a little slow. There are several scenes of the men sitting around in a saloon and drinking and talking, and these scenes slowly tease out character details and backstories, and show the slow camaraderie that develops between them before all hell breaks loose. There is fair amount of humour here to leaven the violence.

Unlike many recent remakes that have tarnished the memories of the original film (think Ben Hur, etc), this new take on the classic The Magnificent Seven is quite good. It exploits the tropes of a traditional western in its formula. Many of the classic westerns of yesteryear explored the myth of one good man standing up to evil on the wild frontier and dispensing justice. But writers Richard Wenk (The Equalizer, etc) and Nic Pizzolatto (True Detective, etc) also effectively use the formula to explore some more contemporary themes of corporate greed, courage, loyalty, heroism, sacrifice, and even a hint of feminism that will resonate strongly with modern audiences.

As he showed with Olympus Has Fallen, Fuqua knows how to stage some exciting and spectacularly visceral action sequences. There is an early gunfight in the dusty streets of Rose Creek that is tense and well-staged, and it sets the scene for the climactic attack on the town. This rousing 30 minutes action sequence is the highlight here, a gritty and violent and superbly choreographed set piece full of gun play, carnage and pyrotechnics that doesn’t disappoint. In the original, the villainous Calveros brought just thirty bandits to attack the village; here Bogue brings a veritable army of a hundred men, plus a deadly Gatling gun, to the fray. This version of The Magnificent Seven has the highest body count of any western since The Wild Bunch.

The film looks good thanks to the widescreen cinematography of Fuqua’s regular cinematographer Mauro Fiore that captures the harsh beauty of the epic landscapes. The film also features the last soundtrack composed by the late James Horner, and the music also pays homage to Elmer Bernstein’s memorable theme music for the 1960 original.

Performances are a bit of a mixed bag. This is Washington’s third collaboration with Fuqua (following his Oscar winning turn while cast against type in Training Day and The Equalizer) and the director seems to be able to tap into the meaner side of an actor known for playing essentially decent characters with strong moral fibre. Pratt brings a jocular and easy going charisma to his role and he provides most of the comic relief. Sarsgaard comes across as the cliched bad guy with no redeeming features whatsoever, and he does all but twirl his moustache with a cliched performance as Bogue, who is filled with contempt for the poor struggling and hardworking farmers. Hawke brings some pathos and nuances to his performance as the former soldier wrestling with a form of psychological disorder following his experiences, and he is the most complex character here. Bennett’s performance as the feisty Emma reminded me a little of Hailee Steinfeld in the recent remake of True Grit.

As a genre, the western has been dead for many years despite some attempts to bring it back to life on the big screen with films like Tarantino’s superb and violent Django Unchained, The Hateful Eight, and the visually stunning The Revenant, etc. This reimagining of the classic The Magnificent Seven is a solid western, full of action, gunplay, and featuring a strong ensemble cast that should appeal to audiences.