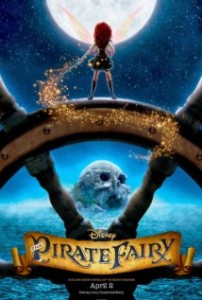 Summary: When a misunderstood dust-keeper fairy named Zarina steals Pixie Hollow’s all-important Blue Pixie Dust, and flies away to join forces with the pirates of Skull Rock, Tinker Bell and her fairy friends must embark on the adventure of a lifetime.

OUR TINKER BELL AND THE PIRATE FAIRY REVIEWS & RATINGS:

While the whole cinema world has been flocking to the cinemas over recent years to see big franchises such as The Hunger Games and The Avengers one much smaller franchise has been chuffing along quite nicely producing enjoyable films while also managing to sell a lot of tickets and DVDs. That franchise has been Disney’s Tinker Bell franchise which is often overlooked by any cinema patron who doesn’t have small children… a shame because it has turned out to be a franchise that has produced some pretty good animated films and always seems to be able to bring an A-List guest to the table… or should that be microphone.

The latest film is the franchise is Tinker Bell And The Pirate Fairy a film which sees the much loved fairy Tinker Bell (voiced by Mae Whitman – American Dad, Teenage Mutant Ninja Turtles) make a much anticipated return to Never Land where most Disney buffs would have first seen her, in the tale of Peter Pan.

The story starts in Pixie Hollow where an inquisitive young fairy by the name of Zarina (Christina Hendricks – Lost River, God’s Pocket) is making a name for herself by asking way too many questions about the science involved with Pixie Dust. When one of her scientific experiment goes horribly wrong and endangers the lives of everybody in Pixie Hollow she flees from her friends to begin a new life.

Years later as Tinker Bell and her friends Silvermist (Lucy Liu – The Man With The Iron Fists, TV’S Elementary), Iridessa (Raven-Symone – Pixie Hollow Bake Off, TV’S See Dad Run), Rosetta (Megan Hilty – Lucky Duck, TV’S It Could Be Worse) and Vidia (Pamela Adlon – TV’S Californication, Louie) prepare for the Pixie Games they are horrified when it comes under attack by Zarina who uses a potion to make everybody sleep while she steals the holy grail… the Blue Pixie Dust. Tinks and her friends set off after Zarina and learn that she has now become part of a crew of Pirates that also features Captain James Hook (Tom Hiddleston – Muppets Most Wanted, Thor: The Dark World) who plan on using the Blue Pixie Dust for criminal gain while putting all fairies at risk.

Tinker Bell And The Pirate Fairy is a film that deserves a lot more credit than it will ever get from most film buffs. Sure the animation isn’t as spectacular as what you will see in a big Pixar or Dreamworks animation but that is something that you don’t notice due to the good storyline and wonderful characters. In fact it almost feels like a bit of a journey itself being able to sit down and watch the same Disney animation style and characters that we all grew up with when we were children ourselves.

Directed by Peggy Holmes (Secret Of The Wings, The Little Mermaid: Ariel’s Beginning) and put together by a long list of screenwriters Tinker Bell And The Pirate Fairy has the challenge of following up The Secret Of The Wings which too many fans of this franchise was the best film to date. Not to be outdone though The Pirate Fairy sees this franchise become a prequel to one of the greatest Disney films ever made Peter Pan. In a way that certainly can’t be described as disrespectful the film explores Tinker Bell’s first crossing of paths with the infamous Captain Hook who of course is one of the animated film world’s best loved villains.

Teh story works well and the decent script allows for Disney to produce the trustworthy formula that has always made their films work. Much loved characters being involved it storylines that will entertain the whole family while also throwing the odd song or two that is going to get stuck inside most audience’s member’s heads long after the credits have rolled. And unlike How To Train Your Dragon 2 the screenwriters here have managed to bring things such as sword fights without bordering into some violence that might scare younger audience members.

As has become the norm in this franchise the voice cast once again put in great performances. For the likes of Whitman, Liu, Hilty and Raven they have voiced these characters so many times that they now deliver performances so professional that they should now be considered some of the better voice actors going around. Once again some A-Listers come to this franchise as guest stars, this time Christina Hendricks voices the rough and ready Zarina while Tom Hiddleston (who most would know as Loki from The Avengers) seems to have a great deal of fun as he voices the legendary Captain Hook.

Tinker Bell And The Pirate Fairy once again shows that this is a franchise that can deliver quality animated entertainment. The well written script provides a story that is going to be enjoyed by children and parents alike while the fact that it serves as a prequel to Peter Pan means that this is one film that the Disney buffs out there are going to have to have in their collection. At the end of the day Tinker Bell And The Pirate Fairy is a surprisingly good film.