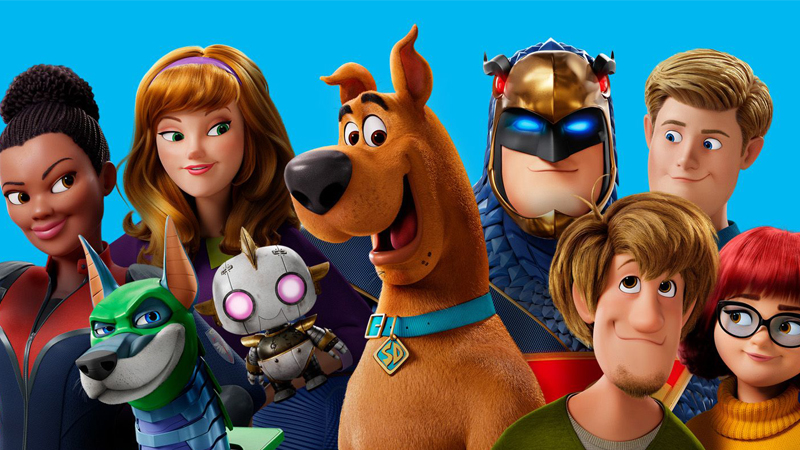 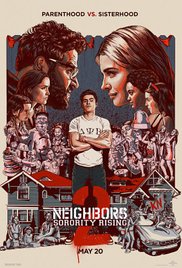 Summary: Just as Mac (Seth Rogen) and Kelly (Rose Byrne) sell their home and plan on moving to the suburbs they suddenly find themselves under attack again as a sorority led by party girl Shelby (Chloe Grace Moretz) move in next door. The arrival of former frat boy Teddy (Zac Efron) has everybody asking which side he will decide to join.

The last few things have shown us that comedy sequels often do not live up to original film in the franchise… especially, so it seems, if that original film was an absolute comedy gem. Comedy fans have watched as franchise after franchise have taken this ill-fated path as – Zoolander 2, Horrible Bosses 2, Hangover 2 + 3 and Anchorman 2 have all fallen well short of the brilliance that their predecessor had brought. The result was scorn from film critics and comedy lovers right around the world.

Now we find ourselves sitting down to watch Bad Neighbours 2: Sorority Rising a film born into existence after the shock success of the 2014 adult rated comedy. With much of the key cast and crew returning for a second trip you could be excused for thinking that this film would be just as good… sadly that wasn’t the case.

This time around we find young parents Mac (Seth Rogen – This Is The End) and Kelly Radner (Rose Byrne – Insidious) expecting their second child and in the middle of selling their home as they decide to move their expanding family out to the suburbs. With the house sold the couple just have to hope that nothing goes wrong during the thirty day cooling off period.

Enter Shelby (Chloe Grace Moretz – Kick-Ass) who feels that the sororities are getting the raw end of the deal when she discovers that they can’t party the same way as fraternities. Desperate to proves that girls can do it just as well as boys she moves her sorority into the house next to Mac and Kelly’s causing the couple to realise that their nightmare is coming true. Worse still is the fact that after being thrown out by his best friend, Pete (Dave Franco – Now You See Me), former fraternity leader Teddy Sanders (Zac Efron – The Lucky One) is only too happy to teach them everything he knows.

Sadly though Bad Neighbours 2 is another sequel that struggles to get anywhere near the quirkiness and humor that the first film managed to produce. The sad thing about this film is that it should have been painfully clear for anyone watching the first cuts of the film to see what had gone wrong – yes the problems here at basic but enough to sink the film.

The main thing that drags down this film is some very lazy and poor screenwriting. At times it feels like the writers here forgot key points from the first film, things such as the fact that at the end of the film Mac and Teddy met up and seemingly settled their difference, yet at the beginning of this film it feels like they haven’t seen each other since the frat moved out and Teddy still has a score to settle. Likewise much of the ‘wrong’ comedy that made the first film work so well are missing here. At the screening I was at the audience burst into laughter the 2-3 times the writers were game enough to attempt a politically incorrect joke but for the rest of time barely raised a chuckle as attempted jokes just played out on the screen in front of them.

The other big issue with Bad Neighbours 2: Sorority Rising is the members of the sorority themselves. It seems like the writers were hamstrung with what they should do with most of the female characters this time around. On one hand they set up Shelby, Nora (Beanie Feldstein – Fan Girl) and Beth (Kiersy Clemons – Dope) as bad girls who want to live up life at college. Yet when it comes to the crust of things we see anything but and the girls end up becoming walking clichés whose actions seem to become very ‘unimportant’ to the writers. In one scene a big deal is made about the fact that Shelby is a virgin yet her ‘Shelby Lost Her Virginity’ is shown in a quick ten second montage. As if that isn’t made enough the writers seem to have borrowed the characteristics of the girls from Pitch Perfect – perhaps they didn’t think we would notice that the alternative girl, the larger girl and the strange-speaking Asian character act had all been done before.

Sadly it seems the sorority was ruined by writers who seemed to want to make the characters too politically correct and as a result they lost their hard edge. Remember back to the original film when Teddy, Pete and Scoonie (Chrisopher Mintz-Plasse – How To Train Your Dragon) were politically incorrect yet also had memorable characterisation? Well all of that is missing here from the girls of the sorority and boy does it show. Perhaps the writers needed to revisit films like Valentine and Sorority Row to see how ‘bad’ sorority girls should be written.

The other unfortunate losers when it comes to the writing are the cast. Rogen and Byrne are certainly held back from delivering the good comedic performances they did in the first film and while supporting cast members like Ike Barinholtz (Sisters) and Carla Gallo (We Bought A Zoo) do get the odd laugh here and there it just isn’t enough to save the film. And as for poor Chloe Grace Moretz, well this normally good actress is reduced to a ‘nothing’ role that is best to be left off her resume.

In reigning in Bad Neighbours 2: Sorority Rising and making it more politically correct than the original film in the franchise the powers-that-be behind the film have made this a largely unfunny film that rehashes old jokes and doesn’t even deserve to live in the shadow of its much more impressive brother. Fans of the original film beware, you will not get as many laughs this time around.

Movie sequels can be very hit and miss for any number of reasons, for every Terminator 2 there’s a Terminator 3. Comedy sequels are much more miss than hit, this usually has to do with the set up for the original film not really being suited for a franchise. Some movies like 22 Jump Street or Robocop 2 feature self aware humor about this. As if the writers are nodding to the audience saying “yeah we know its silly, just go with it”. Not every comedy movie needs to break the fourth wall like this but it sometimes helps to know the filmmakers understood how ridiculous it was to make a sequel to something that was better suited as a one off. When they don’t then often the movie can come off as a shameless cash in.

Bad Neighbors 2 is the sequel to the hugely successful 2014 comedy. When we last left our protagonists new parents Mac (Seth Rogan) and Kelly (Rose Byrne) they had successfully defeated the troublesome fraternity and its leader Teddy (Zac Efron) who had moved in next door to their new home. They were content and ready to continue their lives without fear of loud late night parties next door or stray condoms in their front yard. Flash forward 2 years and Mac and Kelly are expecting a second child, despite all their money going into their new home in the first film it is apparently time to upgrade to another house in a different neighborhood. They’ve bought their new home, sold their “old” house to new home owners and are now waiting for the 30 day cool off period to end before they can officially move on. Much to their dismay at this point a sorority led by pot smoking partying Shelby (Chloe Grace Moretz) and her forgettable friends moves in to the old frat house next door and Mac and Kelly and the audience find history repeating itself.

Personally I really enjoyed the original Bad Neighbors. The characters were as believable as they needed to be, the improvisation (line-o-rama) scenes didn’t feel out of place and the humor was on par with what I expected. It was a somewhat average frat-house comedy but I enjoyed it. This movie didn’t quite match that. To be honest I didn’t have high expectations yet still I felt disappointed. Generally it feels like a lazy rehash of the original movie without any of the minimal characterization or even minimal originality which made it decent. The story largely playing out the same way we saw it 2 years ago but without the focus on the characters that was needed it streamed from one joke to the next without me ever seeing why I should care about anyone in the movie. The “this is sexist” angle is played out in such an over the top hamfisted but unfunny way im not sure why they bothered in the first place.

Bad Neighbors 2 is a movie which probably shouldn’t have been made. While not being quite as bad its very much on the Hangover 2 side of comedy sequels. I’m much more a fan of “follow ups” than sequels in this case where the same crew and principal actors make another movie in the same vein as the original rather than a straight sequel. I’d much rather Hot Fuzz than Shaun of The Dead 2. If only something similar had been done here.