One Eyed Girl To Get Australian Release 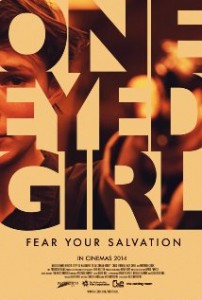 Hot on the heels of Austin Film Festival’s early line-up announcement which includes the World Premiere of  “One Eyed Girl”, The Backlot Films is proud to announce its plans to release the South Australian psychological thriller in Australian cinemas during the first quarter of 2015.

Starring Tilda Cobham-Hervey (52 Tuesdays) and Mark Leonard Winter (Healing, Van Demons Land), with a gripping screenplay by Matthews and Craig Behenna, One Eyed Girl follows the story of a psychiatrist (Winter) haunted by the death of a former patient, who stumbles upon a Doomsday cult and battles to save a teenage girl (Cobham-Harvey) from its clutches.

Co-founder and director of The Backlot Films, Tony Ianiro says, “Upon our first meeting with David Ngo many months ago, we encountered the same level of passion that he had for his craft which Mark (D’Angelo) and I have for Backlot. There was clearly a positive chemistry from the get go.

“David Ngo’s Projector Films, The Backlot Films and industry publicity and marketing specialists Jameson PR will combine to execute a fresh and unique campaign in the lead up to the theatrical release of ‘One Eyed Girl’ in 2015.

“In many respects, this is a unique project for us as it marks not only our involvement as distributor, but also as the first feature film in which The Backlot Studios, Melbourne was utilised to conduct the final audio mix, using our in house audio team at Backlot Post (Mark D’Angelo & Craig Jannson) in collaboration with one of the best audio re-record mixers in the world, Phil Heywood (The Lego Movie, The Great Gatsby, The Lord Of The Rings trilogy).

“The film itself is charismatic, honest and rich in production values, whilst the subject matter depicted in ‘One Eyed Girl’ – ‘a cult and its laws of attraction’ will remain with viewers long after they have witnessed it.

Our next phase is to introduce the film to our exhibition partners. We will create a long lead campaign and endeavour to get exhibition and media genuinely excited about One Eyed Girl in the lead up to its release.

“We are fortunate to have access to the filmmakers and key cast for in cinema Q&As across the country, pre-release – a strong indication that veryone attached to this project is committed…..it’s now time to make it happen!”

Produced by David Ngo and Co-Written by Craig Behenna, as part of the SA Film Corporation’s Filmlab program, this film creates a confronting indictment of an ethically lost and alienated society where the blind indeed seem to lead the blind.

Ngo says, “We are so excited to have our film open at the prestigious Austin Film Festival. To know your film will screen in front of people like Tommy Lee Jones, James Franco, Matthew Weiner and Lawrence Kasdan is a huge honour and also, quite frankly, scary as hell.

“We can’t wait to then follow this up with the release in Australia with Backlot. As a filmmaker there’s nothing quite like watching people lining up and buying popcorn to see your movie.

“There’s no doubt the cast will go on to do many big things. Hollywood’s already knocking on young Tilda’s door and I think people will be blown away by Mark’s performance. He really reminds me of a young Daniel Day Lewis.”

The “One Eyed Girl” creative team was selected by a panel of assessors including Margaret Pomeranz (At The Movies), and producer Bridget Ikin (My Year Without Sex, Look Both Ways) to develop the film through the SAFC’s FilmLab program where they were mentored by acclaimed filmmaker Rolf de Heer (Charlie’s Country, Ten Canoes, Bad Boy Bubby).

After two years of writing, casting began in 2012 and used a combination of traditional avenues and social media to discover some of its younger cast members. Having already cast Mark Leonard Winter in the lead male role of Travis, the ‘Search for Grace’ and ‘Search for Marcus’ online campaigns attracted over 600 applicants from all over the world and finally chose Matthew Crook to play Marcus and for the title role, then seventeen year old Tilda Cobham-Hervey, who has been described by Variety magazine as one of five up-and-coming actresses to watch. The film also stars Steve Le Marquand (Rake, Vertical Limit).

Filming began in December 2012 on an isolated farm in the hills of Adelaide. This hugely ambitious film was also the first feature for many of the heads of department – Production Designer Anny Duff, Cinematographer Jody Muston and Make-Up Artist Rebecca Buratto.

“One Eyed Girl” will open in Australian cinemas in early 2015, distributed by The Backlot Films.