This week on The Good The Bad The Ugly Film Show Adam, Dave, Greg and Nick take a look at new release films ‘Berlin Syndrome,’ ‘Colossal,’ ‘Denial,’ ‘Frantz,’ ‘The Fate Of The Furious,’ ‘My Pet Dinosaur,’ ‘Going In Style,’ ‘Raw,’ ‘Their Finest,’ ‘Personal Shoper’  and ‘Certain Women’. 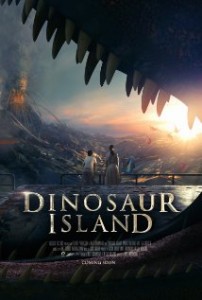 DINOSAUR ISLAND was conceived three years ago by Emmy award winning creature effects expert MATT DRUMMOND and is a family film aimed primarily at children aged from 6 to 12 years.

The feature film came about when Australian director, Drummond was living in Vanuatu, where his company, Hive Studios worked on a string of dinosaur documentaries featuring dinosaurs for American cable networks National Geographic, History and Discovery channels.  In Vanuatu, Drummond met legendary Hollywood producer, Paul Mason who encouraged him to make his first movie.

As Drummond explains “My previous experience running a visual effects studio had taught me that every project I do has to be commercially viable, if not, it just wasn’t worth doing because the name of the game is sustainability. I did most of the visual effects myself; I have 20 years’ experience in creature effects” (he won an  Emmy Award last year for Art Direction and Graphic Design for his work on Big History for the History Channel).

The score for DINOSAUR ISLAND was composed by Australian musician, Chris Wright and the title track was recorded by Kate DeArougo (Australian Idol winner).

DINOSAUR ISLAND is garnering international attention from both the scientific and entertainment community with Drummond’s controversial choice to portray some of the dinosaurs as feathered, notably the Tyrannosaurus.

According to Science, “The most recent discovery of fossilized feathers on a newly identified dinosaur far removed from the bird lineage means that feathers likely were more widespread than previously thought in the dinosaur world.” These latest findings add further weight to the feathered versus non-feathered debate and could change the way scientists’ and film audiences view dinosaurs.

Fans of the film love what has been dubbed as the “fluffy t-rex.” with many referring to Director, Colin Trevorrow’s decision not to include feathered dinosaurs in the upcoming feature Jurassic World.  Noted geophysicist and science journalist, Mika Mckinnon writes that she is, “delighted that the first Dinosaur Island trailer features a fantastically fluffy T-Rex.”

In response to the renewed debate, Director Matt Drummond states, “Our Tyrannosaur is more about character…Having worked with Jack Horner, Luis Chiappe and a range of paleontologists on all sorts of documentaries and exhibits, one thing is irrefutable… none agrees with the other. It’s an ever evolving science and new discoveries trump old theories almost weekly. Hopefully what we have created sparks the imagination and provides some great entertainment.”

Arclight Films acquired the international sales rights to the film at the Cannes Film Festival and it has since been one of their best-selling films. It has been acquired internationally in over 50 countries for both theatrical/DVD/VOD and network commitments. Notably, Millennium Films have recently acquired the film rights for North American release in 2015.

Pinnacle Entertainment has acquired the rights for DVD/Network and VOD platforms in Australia for release on April 1.