[FILM REVIEW] OUT OF ORDER Review 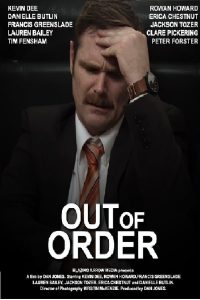 Summary: A middle-aged lawyer lands the case of his life but at the same time his life around him is falling apart… then comes the blackmail.

OUR OUT OF ORDER REVIEWS & RATINGS:

Dave Griffiths’ Out Of Order Review:

A character can make or break a film. It is something that our lecturers frequently told us at film school but it’s something that any film lover will learn very early on as the amount of films they watch grows. I’m not talking about iconic characters like John Rambo or The Terminator. I’m talking more about those films that would be easily forgettable if it wasn’t for a character that stuck in your mind long after the credits rolled.

For me that list has always consisted of characters like Raymond Babbitt in Rain Man or Kenny Rossmore in We’re The Millers. Now I am adding Ron from Out Of Order to that list.

Ron (Kevin Dee – Underbelly) is the kind of man that life never gives a break to. He is lawyer who is good at his job and is largely respected by his colleagues. But at the same time he is ignored by his wife, Gloria (Lauren Bailey – Before I Go) and in general has his life made harder by ‘idiots’ like his colleague Jerry (Rowan Howard – Holding The Man) who holds onto far out theories such as the moon was blown up during, as he puts it ‘one of the wars,’ in order to get rid of werewolves.

Then there is the fact that in modern times Ron finds that he can’t even assume that his dog identifies as a dog. Yes, the world is an infuriating place and now Ron finds himself in the middle of a case of the lifetime just as somebody begins to blackmail him.

Why Ron works as a character is because he is the kind of character an audience will find themselves ‘barracking’ for throughout the film. He is likable and has a certain quirkiness to him that is further enhanced by the fact that director/screenwriter Dan Jones (The Chase) has made him well-rounded rather than the two-dimensional clichéd characters that often litter modern day indie films.

As a character Ron is brought to life brilliantly by Kevin Dee who Out Of Order reveals to be one of Australia’s best under-rated actors. Together with Rowan Howard Dee delivers some truly memorable scenes and the duo are well aided by a witty and intelligent script that not only contains some great one liners but also keeps the audience guessing to what is going to happen next.

The inclusion of blackmail while Ron is working on his intense case works to make the film more suspenseful and to his credit Jones never reveals anything to the audience that will sign-post the films finale. The result is a film that maintains your interest throughout while not forgetting to make you laugh a few times as the story plays out. A script that actually manages to mix comedy and drama the way Out Of Order does is certainly very, very rare.

Out Of Order shows just how great indie cinema can be. Not only does the film reveal the acting talents of Kevin Dee but also unveils the filmmaking talents of Dan Jones – a director/screenwriter that I really hope we see a lot more work from in the future. The film’s dark comedy element never makes you cringe and the film itself is the breath of fresh air we all need in this crazy world.

Other Subculture Entertainment Out Of Order Reviews: