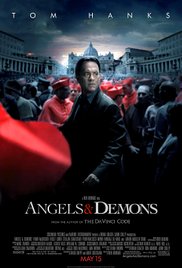 Summary: Harvard symbologist Robert Langdon works to solve a murder and prevent a terrorist act against the Vatican.

Despite generating far less hype than it’s predecessor ‘Angels & Demons’ is actually a far superior to ‘The Da Vinci Code’ and shows that when given enough time Director, Ron Howard can create a wonderful film based on Dan Brown’s work.

Despite the novel ‘Angels And Demons’ being set before ‘The Da Vinci Code’ the film actually takes place after the initial story and this time finds Harvard symbologist, Robert Langdon (Tom Hanks) summoned to Vatican City by Camerlengo Patrick McKenna (Ewan McGregor) who has proxy-control of the Catholic Church after the death of the current Pope. Once at the Vatican McKenna tells Langdon that the Vatican is under a terrorist threat from an old enemy… The Illuminati.

My biggest criticism of ‘The Da Vinci Code’ was that the end result suffered from the fact that the production of the film was rushed in order to release it while the novel’s popularity was still at its peak. Luckily this isn’t the case with ‘Angels & Demons’. The experienced screen writing team of David Koepp and Akiva Goldsman have managed to turn the novel into a smart thriller that does actually keep the audience guessing and at times on the edge of their seats.

‘Angels And Demons’ does have a few ‘James Bond-how-could-you-possibly-manage-to-do-that?’ but overall works well. It leaves you constantly guessing (and more importantly actually caring) what happens next, is well written and beautifully captured. Easily better than ‘The Da Vinci Code’.