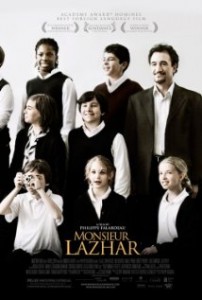 Summary: In Montreal, a Year 6 class is shocked and saddened by the sudden passing of their beloved teacher, Martine. Having learned of the incident in the newspaper, Bachir Lazhar, a 55 year-old Algerian immigrant, makes his way to the school and offers his services as a substitute teacher. Little by little, Lazhar comes to understand this motley but endearing group, among whom are Alice and Simon, two charismatic pupils particularly affected by their teachers passing. Yet while the class begins to heal, nobody in the school is aware of Lazhars painful past. Nominated for an Oscar in 2012 and from the producers of the award winning INCENDIES, MONSIEUR LAZHAR is a profoundly moving story about a group of young schoolchildren coming to terms with the adult world before their time, and the inspirational educator who transforms their lives.

If Monsieur Lazhar were an American film it’s the kind of film that Robin Williams (Happy Feet Two, Old Dogs) would be falling over himself to land the lead role. This is a hart-warming film that touches on some deep topics, it will make you cry but it will also restore your faith in the fact that modern cinema can still make real films with heart.

The film follows the events that occur after a popular teacher hangs herself in the classroom of her Montreal school after suffering from ‘personal problems’. Her hanging corpse is discovered by one of her students, Simon (Emilien Neron – Un Teur Si Proche) and also seen by another, Alice (Sophie Nelisse – newcomer).

With the school in crisis, the headmistress Ms. Vaillancourt (Danielle Proulx – Reste Avec Moi, TV’S Lance et compte: Le grand duel) is desperate to find a teacher for the upset class. In steps Bachir Lazhar (Mohamed Fellag – Je Vous Ai Compris, Zarafa) who announces himself as a teacher from Algeria. What he chooses to leave out is the fact that he is a refugee looking for asylum in Canada after the murder of his family back in Algeria. While he fights for the right to stay in Canada he finds himself trying to bond with a group of students who are still unsure of why their beloved teacher took her life.

Diector/screenwriter, Philippe Falardeau (It’s Not Me I Swear, Congorama) proves with Monseur Lazhar that if you have a good script to begin with that normally the film is going to turn out looking amazing. This is the kind of film that captivates the audience from start to finish. Falardeau not only allows the film to concentrate on how the children deal with their teacher’s death but also raises some pretty intense suspension about Lazhar himself.

It is obvious that Falardeau wants the audience to ask questions, and to be a little uneasy at times. He sets Lazhar up as a likeable character but when some secrets about him are unearthed you begin to wonder whether or not he has some sinister plans behind him. This suspision and the fact that the character of Simon seems to be falling apart right in front of the audience’s eyes soon has the film dipping out of the drama genre and becoming a really involving thriller.

The power of the film does come from strength of Falardeau’s writing but a lot of credit must also be paid to the cast. Mohamed Fellag puts in an award-winning performance in the title role and he is well supported by relative newcomers Emilien Neron and Sophie Nelisse who show the world that they are some of the most talented child actors going around. Both of them put in performances well and truly above their age.

Monseur Lazhar is a very special film indeed. This well written gem is one of the best films to surface in 2012, a must see for those who love good cinema.