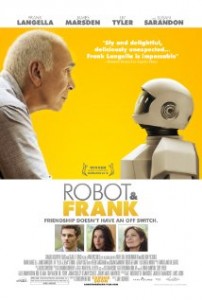 Summary: Set in the near future, Frank, a retired cat burglar, has two grown kids who are concerned he can no longer live alone.  They are tempted to place him in a nursing home until Frank’s son chooses a different option: against the old man’s wishes, he buys Frank a walking, talking humanoid robot programmed to improve his physical and mental health.  What follows is an often hilarious and somewhat heartbreaking story about finding friends and family in the most unexpected places.

Take a quick look at the poster for Robot & Frank and you could be excused for thinking that you are about to head into a film that is so low on the budget that they have used a dodgy robot left over from the Pixar design team. If that makes you turn around and leave the cinema though it means you’ll be missing out on seeing one of the films of the year… because Robot & Frank is an absolute gem.

Frank (Frank Langella – Unknown, The Time Being) is a former prisoner who even is his old age is finding it hard to give up the habit of having to steal every now and then. He lives a very lonely life, he’s been divorced for thirty years and his son Hunter (James Marsden – Bachelorette, TV’S 30 Rock) visits when he can and his daughter Madison (Liv Tyler – The Ledge, Super) phones in quick thirty second video calls from wherever her travels have taken her this week.

Although he would never admit it Frank does struggle with life, things like household chores become too much for him and his only escape from his life is to go to the library and visit Jennifer (Susan Sarandon – That’s My Boy, The Company You Keep) whom he has a crush on. However things are about to get a lot better for Frank when Hunter buys Frank a Robot (voiced by Peter Sarsgaard – Green Lantern, Knight & Day) that is supposed to make life easier for Frank… he just has to accept that.

Together director, Jake Schreier (Christopher Ford Sees A Film) and screenwriter, Christopher D. Ford (Eugene!, The Fuzz) have created a very special film indeed. Despite the fact Frank is a criminal you can’t help but feel for him, especially when you realise that he is a very lonely man indeed. The fact that you find yourself relating to him means that whether the threat is coming from the police or from the ‘evil’ Jake (Jeremy Strong – Lincoln, See Girl Run) you want to see Frank and Robot outsmart them.

The other big win that Schreier and Ford can celebrate is the fact that despite his plain look and monotone voice the character of Robot also becomes quite likable, so much so that you realise aside from its science fiction based plot this is ultimately a ‘buddy’ film… and a very good one at that.

Frank & Robot is so good that it shouldn’t be completely dismissed that Frank Langella’s name could come to the fore during Awards season. Langella puts in a truly remarkable performance that really allows him to shine as his co-stars, including Susan Sarandon, Liv Tyler and James Marsden are all given limited screen time.

This little indie classic will warm the hearts of even the hardened cinema fan and don’t be surprised if it doesn’t earn itself a couple of Awards.