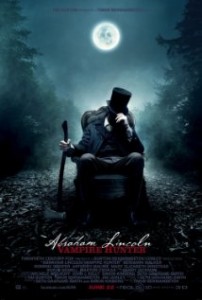 Summary: Abraham Lincoln: Vampire Hunter explores the secret life of our greatest president, and the untold story that shaped our nation. Visionary filmmakers Tim Burton and Timur Bekmambetov (director of Wanted) bring a fresh and visceral voice to the bloodthirsty lore of the vampire, imagining Lincoln as history s greatest hunter of the undead..

As a film Abraham Lincoln: Vampire Hunter seemed doomed before it even opened in cinemas. People judged the film by the title itself and came up with the conclusion that the film must be a comedy. Let’s be blunt the film is anything but a comedy, anyone that has seen the work of director, Timur Bekmambetov (Yolki 2, Six Degrees Of Separation) will now that he doesn’t shoot comedy. No Abraham Lincoln: Vampire Hunter is just as action-packed and just as gory as his two massive hits Wanted and Nightwatch.

Based on a  graphic novel by Seth Grahame-Smith (TV’S The Hard Times Of RJ Berger & Vendettas), who also coincidentally wrote the screenplay here, the film tells the story of Abraham Lincoln (Benjamin Walker – Westward!, Coach) in a way that the history books certainly don’t. Here Lincoln is a young man who swears vengeance on Jack Barts (Marton Csokas – Dead Europe, Dream House) a business owner who Lincoln sees kill his mother.

Through a chance meeting with the mysterious Henry Sturges (Dominic Cooper – My Week With Marilyn, Captain America: The First Avenger), Lincoln learns that Barts is a vampire and that America is full of them. Sturges trains Lincoln and soon he is a vampire hunter who is sworn to protect humans from the likes of Adam (Rufus Sewell – All Things To All Men, TV’S Mystery!) who has a very nasty (and bloody) plan for America.

Of course, Lincoln chooses to ignore the ‘no friends for a Vampire Hunter’ regulation and soon his friends Will Johnson (Anthony Mackie – Man On A Ledge, 10 Years), Joshua Speed (Jimmi Simpson – Hello I Must Be Going, TV’S Breakout Kings) and love of his life Mary (Mary Elizabeth Winstead – Smashed, The Thing) are all mixed up in this deadly battle.

The fact that some people believe that Abraham Lincoln: Vampire Hunter is going to be a cheesy film is almost insulting as it is anything but. Bekmambetov makes this a stylish action film, that despite the fact he falls back on the slow-motion shots too much, generally looks good. His fight scenes are well chorographed and certainly don’t spare the audience from the violence at hand, while the scene of the train crash on the bridge is one of the best sequences you will see on the big screen this year.

Credit must also be made to Seth Grahame-Smith who does a sensational job with the script. His fictional part of the story fits well into the non-fiction side of Abraham Lincoln’s life and despite the fears of many it never feels like this film is insulting to one of America’s greatest leaders.

If you like well put together action films then you certainly won’t be disappointed with Abraham Lincoln: Vampire Hunter.