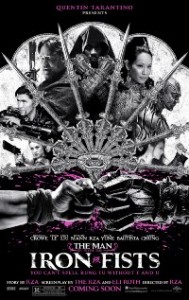 Summary: Quentin Tarantino presents The Man With the Iron Fists, an action-adventure inspired by kung-fu classics as interpreted by his longtime collaborators RZA and Eli Roth. Making his debut as a big-screen director, co-writer and leading man, RZA – alongside an exciting international cast led by Russell Crowe and Lucy Liu – tells the epic story of warriors, assassins and a lone outsider hero who all descend on one fabled village in China for a winner-takes-all battle for a fortune in gold. Blending astonishing martial-arts sequences from some of the masters of this world with the signature vision he brings as the leader of the Wu-Tang Clan and as one of hip-hop’s most dominant figures of the past two decades, RZA embarks upon his most ambitious, stylized and thrilling project to date.

Dave Griffiths’s ‘The Man With The Iron Fists’ Review:

Sometimes it is said that when you’re going to see a film you should simply ‘leave your brain at the door’. Basically it is a warning meaning that if you think too much about the film you’ll ruin any opportunity you have of enjoying one single thing about the film. That is certainly the case with ‘The Man With The Iron Fists’ a film that sees Wu Tang Clan rapper RZA decide it is time to become a filmmaker.

Also from the pen of the legendary Eli Roth (Aftershock, Hostel Part III) ‘The Man With The Iron Fists’ sees a young Blacksmith (RZA – A Very Harold & Kumar 3D Christmas, TV’S Californication) find himself in between two feuding parties when all he really wants to do is ‘pay’ brothel owner Madame Blossom (Lucy Liu – Tinker Bell & The Secret Of The Wings, TV’S Elementary) for his girlfriend, Lady Silk (Jamie Chung – Premium Rush, TV’S Once Upon A Time) and leave then town with her, but fate has another idea.

Soon the Blacksmith finds himself involved when Silver Lion (Byron Mann – Cold War, TV’S Arrow) and Bronze Lion (Cung Le – Dragon Eyes, True Legend) kill Gold Lion (Kuan Tai Chen – White Vengeance, Gallants) and then plan on killing his son, Zen Yi (Rick Yune – China Town, Remiagration) to prevent him from becoming the leader of the Clan. However when Silver and Bronze Lion also end up stealing a large sum of cash Blacksmith finds himself teaming up with Zen Yi and the mysterious Jack Knife (Russell Crowe – Les Miserables, The Next Three Days) in a bid to put a stop to their evil plan. However that means they are going to have to find a way to stop the seemingly unbeatable, Brass Body (Dave Bautista – The Scorpion King 3: Battle For Redemption, House Of The Rising Sun).

It’s hard to imagine that when RZA was creating ‘The Man With The Iron Fists’ that he was expecting for it to be an Oscar winner but then at the same time you can’t help but wonder why people such as Russell Crowe wanted to be involved in a film that will be considered B Grade – at best.

As a film itself ‘The Man With The Iron Fists’ surprisingly works a lot better than you would expect. It is a flimsy storyline and the special effects look like they may have been done in the Channel 31 studio but still for some the reason the film sucks you in. Despite how much you may actually try to fight it you will find yourself barracking for Blacksmith as the film goes on.

Of course acting isn’t a major priority in ‘The Man With The Iron Fists’. It is good to see Lucy Liu back on the big screen and Crowe seems to enjoy the opportunity of being able to overact for once but perhaps the biggest surprise is that RZA does seem to be able to hold it together as an actor.

Yes there are some things with ‘The Man With The Iron Fists’ (such as a soundtrack that is strangely mostly made up of rap music) but if you want an entertaining martial arts film that isn’t going to make you think then it’s well worth a look.

Other ‘The Man With The Iron Mask’ Reviews By Dave Griffiths:http://www.helium.com/items/2396008-the-man-with-the-iron-fists-movie-review