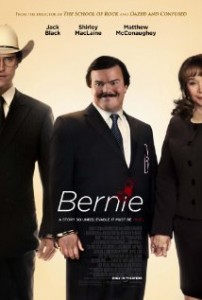 Summary:In the tiny town of Carthage, Texas, assistant funeral director Bernie Tiede is one of the town?s most beloved residents. Bernie befriends Marjorie Nugent, a sour and affluent older widow. Soon Bernie and Marjorie become inseparable and Marjorie becomes very dependent on Bernie, stifling his extroverted personality. Bernie is forced to quit his job and philanthropic activities in the community, leaving him deflated. Then things suddenly get better for Bernie and he seems his old generous self, while Marjorie is mysteriously absent. When Marjorie is discovered to have been dead for months Bernie Tiede is charged with murder, to the great surprise of the local community. From the director of SCHOOL OF ROCK and DAZED AND CONFUSED comes a hilarious and intelligent film based on real life events that astonished the people of Carthage and made them band together in support of their small-town hero . Starring Jack Black (TROPIC THUNDER), Shirley MacLaine (TERMS OF ENDEARMENT) and Matthew McConaughey (THE LINCOLN LAWYER) BERNIE is the story of everyone’s favourite killer and how he almost got away with murder.

Let’s be honest Jack Black (The Muppets, The Big Year) has turned out some real turds over the years but his new film Bernie certainly isn’t one of them, in fact that this could well be the best film that Black has ever had released.

Black plays Bernie Tiede a God-fearing, well-loved funeral director that the entire township of Carthage, Texas is in awe of. There simply isn’t one person in the town who would ever say anything bad about Bernie.

Then Bernie officiates at the funeral of Marjorie Nugent’s (Shirley MacLaine – Valentine’s Day, Anne Of Green Gables: A New Beginning) husband and being his usual self decides to help out Marjorie in the weeks after the funeral. The two form a strong friendship, much to the surprise of the town’s people who consider Marjorie one of the biggest bitches to ever grace the planet.

And while it would be criminal to give away what happens next, let’s just say that soon District Attorney Danny Buck (Matthew McConaughey – Magic Mike, Mud) is soon involved.

You have to hand it to screenwriter/director, Richard Linklater (Me And Orson Welles, A Scanner Darkly) with Bernie he has delivered one of the finest comedies to ever come out of America. Linklater makes the brave decision of using grabs from real residents of Carthage who knew both Bernie and Marjorie and whether or not their responses were scripted may never be known but they are some of the funniest answers you have ever heard… Texan humor at its absolute best.

The saddest thing about Bernie is that any synopsis you read or trailer you watch gives away the films big twist, something you would think that really annoyed Linklater seeing his script so carefully sets up what happens that it comes as a complete surprise for the audience. So if you’re planning on going and seeing Bernie it is recommended that you be very careful what you read.

Linklater is also blessed with an extremely talented cast. Jack Black absolutely shines as Bernie, and delivers one of the best character-driven performances that you are ever likely to see. He is well supported by Shirley MacLaine who as usual is terrific, but even she is overshadowed by Matthew McConaughey who is brilliant as Danny Buck… and once again we are reminded that when given the right script McConaughey can really deliver.

Bernie is the kind of film that has the potential to have you laughing until you cry. A brilliant comedy.