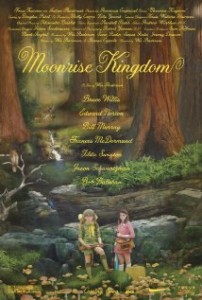 Summary:Moonrise Kingdom is the new movie directed by two-time Academy Award-nominated filmmaker Wes Anderson. Set on an island off the coast of New England in the summer of 1965, Moonrise Kingdom tells the story of two 12-year olds who fall in love, make a secret pact, and run away together into the wilderness.

If you aren’t a fan of director Wes Anderson’s (Fantastic Mr. Fox, The Darjeeling Limited) work then there really isn’t much of a point watching Moonrise Kingdom as it sees Mr. Anderson delve even further into his absurd brand of humor and it works remarkably well.

Set on a New England island in the 1960s Moonrise Kingdom focuses on orphan, Sam (Jared Gilman – newcomer) who organizes a brave escape from his scout troop, led by Scout Master Ward ( Edward Norton – The Bourne Legacy, Stone), so he can spend time with his to-be-girlfriend, Suzy (Kara Hayward – newcomer).

While Sam and Suzy believe they can create their own little piece of paradise they are soon being hunted down by the scouts who are after revenge, as well as local Police Officer Captain Sharp (Bruce Willis – Fire With Fire, The Expendables 2), Social Services (Tilda Swinton – We Need To Talk About Kevin, The Chronicles Of Narnia: The Voyage Of The Dawn Treader) and Suzy’s loopy parents Walt (Bill Murray – Passion Play, Fantastic Mr. Fox) and Laura Bishop (Frances McDormand – Madagascar 3: Europe’s Most Wanted, Transformers: Dark Of The Moon).

Anderson really doesn’t hold back with the comedy. Whether it be a fake looking lame explosion or some incredibly witty dialogue he knows how to get his audience to laugh and it works throughout the film. The fact that is script follows a young Romeo + Juliet style couple involved in their own tragic romance only makes the audience fall in love even more with film.

At time the deadpan nature of the acting does jar a little, but if you’re a fan of Wes Anderson’s work then it is something that you have come to get used to over the years. To his credit Anderson also takes some remarkably risks with Moonrise Kingdom, the fact that his two leads, Jared Gilman and Kara Hayward, are both newcomers and therefore unknown to cinema audiences was a big call that could have massively backfired, but as luck would have it both deliver amazing performances and instead announce themselves as stars of the future.

As usual Anderson does get the best out of his cast. Bruce Willis seems to relish the fact that he gets to play a role that does demand some real dramatic acting while Bill Murray and Frances McDormand lap up the opportunity to play up the comedy with some real out-there characters. But the real stars of the show here are Edward Norton who constantly has the audience in hysterics and Jason Schwartzman (TV’S Bored To Death & Sesame Street) who may only have limited screen time but certainly makes the best of it.

The humor of Moonrise Kingdom may not appeal to all, but if you think it may then this is a film that is guaranteed to make you laugh until you cry.