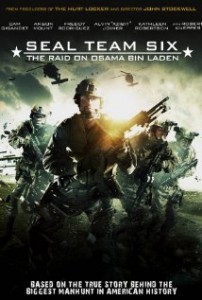 Summary: Based on the military incursion into Bin Laden s compound from the perspective of a small contingent of Navy SEALS. The film takes a look inside their lives as tensions rise between them until they learn the identity of their latest target, whose code name is Geronimo. A break in the manhunt for Osama Bin Laden serves as the riveting backdrop for a gripping story about the combined efforts of an extraordinary group of Navy Seals. This is the story of a clandestine operation, a perfect storm of people, and the rare synergy of circumstances that would amount to the most daring military operation of our generation, inspired by the true story of how it almost fell apart.

With all the publicity (and hopes of cinema goers around the world) on Kathryn Bigelow’s film ‘Zero Dark Thirty’ which looks at the raid that saw Osama Bin Laden finally killed, it is easy to not realise that as far as filmmakers go she was beaten to the story by another film – a film called ‘Seal Team Six: The Raid On Osama Bin Laden’.

Based on the actual events ‘Seal Team Six: The Raid On Osama Bin Laden’ sees the initial planning from CIA agents such as Vivian (Kathleen Robertson – Down The Road Again, TV’S Boss) and Guidry (William Fichtner – Wrong, TV’S Entourage) put together a plan when they believe they have found the hiding place of international terror suspect Osama Bin Laden. Together the pair work ahead to put together a good enough case that will get President Barack Obama to okay the raid.

The second half of the film that sees Seal Team Six which is made up of seals like Stunner (Cam Gigandet – The Tin Star, Trepass), Cherry (Anson Mount – Safe, TV’S Hell On Wheels), Trench (Freddy Rodriguez – TV’S Kaijudo: Rise Of The Duel Masters & Perception), Mule (Xzibit – Weekends At Bellevue, TV’S Detroit 187) and Sauce (Kenneth Miller – The Company You Keep, Jackie) as they prepare for the biggest mission of their careers.

Perhaps the biggest surprise when it comes to ‘Seal Team Six: The Raid On Osama Bin Laden’ is the fact that it was directed by John Stockwell a man known for making surf films (such as Blue Crush and Into The Blue) rather than ‘war’ films. However, Stockwell doesn’t do such a bad job. Yes the low budget of the film shows through in a few scenes but he certainly does keep the suspense at a high level throughout the film.

Among the better scenes in the film are the ones set during the planning of the raid in the Pentagon. As Vivian comes up with ideas that could see the raid going ahead you can’t help but feel a sense of excitement. These scenes also allow William Fichtner to shine, a rarity as he is normally an actor skulking in the shadows in films such as ‘The Dark Knight’ or ‘Black Hawk Down’. This is clearly his best work since ‘Prison Break’.

As far as television movies go ‘Seal Team Six: The Raid On Osama Bin Laden’ is a pretty good watch. It is held back by its low budget but some good scriptwriting overshadows that.