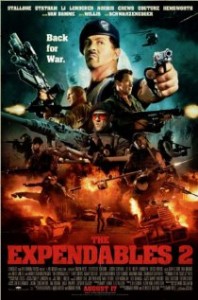 Summary:The Expendables are reunited when Mr. Church enlists them to take on a seemingly simple job. When things go wrong, the Expendables are compelled to seek revenge in hostile territory, where the odds are stacked against them. Hell-bent on payback, the crew cuts a swath of destruction through opposing forces, wreaking havoc and shutting down an unexpected threat in the nick of time – five tons of weapons-grade plutonium, more than enough to change the balance of power in the world. But that s nothing compared to the justice they serve against the villainous adversary they seek revenge from.

There are lots of explosions and lots of blood splatter!!! Is there anything else you really need to know before you go to see The Expendables 2. Nobody knows what action fans want as much as Sylvester Stallone (Zookeeper, The Expendables), who not only stars in The Expendables 2 but was one of the co-writers, so there is little wonder that he has created what turns out to be one of the action films of the year.

For those who didn’t see the first film The Expendables are a bunch of mecenries that basically live by the rule ‘no job too hard’. The Expendables 2 sees the old gang of Barney Ross ( Sylvester Stallone), Lee Christmas (Jason Statham – Safe, Killer Elite)), Yin Yang (Jet Li – The Flying Swords Of Dragon Gate, The Sorcerer And The White Snake), Gunner Jensen (Dolph Lundgren – Universal Soldier: Day Of Reckoning, One In The Chamber), Hale Caesar (Terry Crews – TV’S The Newsroom & Are We There Yet?) and Toll Road (Randy Couture – Hijacked, Set Up) all back together and this time they have a new sniper on their team, Bill The Kid (Liam Hemsworth – The Hunger Games, The Last Song).

After recent successes the team are on a high but Barney soon finds himself having to accept a mission in a bid to settle his debt with Government Agent Church (Bruce Willis – Fire With Fire, Moonrise Kingdom) who provides them with a suitable weapon to get the job done, Maggie (Nan Yu – Design Of Death, Yu Shi Shang Tong Ju). But the easy mission turns to tragedy and soon the team find themselves having to take on the evil, Jean Vilain (Jean-Claude Van Damme – 6 Bullets, Universal Soldier: Day Of Reckoning) in order to get the mission done. And with the likes of Booker (Chuck Norris – The Cutter, Walker Texas Ranger: Trial By Fire) and Trench (Arnold Schwarznegger – The Expendables, Around The World In 80 Days) only too happy to help out there is going to be bloodshed.

It may come as a surprise to many but the storyline of The Expendables 2 actually ain’t that bad, not that surprising when you remember that Sylvester Stallone has won an Oscar for Screenwriting in the past. Of course the screenplay for The Expendables 2 won’t win any Oscars but it is more than enough to keep the audience’s attention and surprisingly there are some actual touching moments.

But of course people aren’t watching The Expendables 2 for the story, so how is the action? Well take any action film that you have seen in the past and multiple the amount of blood splatter and explosions that contained by ten. The action sequences do look good, but it does seem a tad lazy that characters just seem to turn up at the right time to ‘save the day’, and I must admit that the Stallone vs Van Damme epic battle was a little short for my liking.

Still The Expendables 2 does what it sets out to do and that is entertain. If you are an action junkie this is one film you don’t want to miss this year.

Other Subculture Media Reviews of ‘The Expendables 2’: http://www.helium.com/items/2366302-movie-reviews-the-expendables-2-2012.