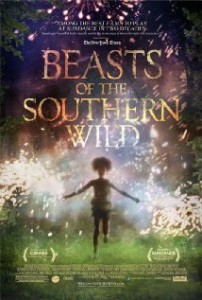 Summary: Faced with both her hot-tempered father s fading health and melting ice-caps that flood her ramshackle bayou community and unleash ancient aurochs, six-year-old Hushpuppy must learn the ways of courage and love.

Just when you start thinking that 2012 is going to be a year of stock standard films, along comes a film that completely changes those thoughts. The only thing is that Beasts Of The Southern Wild is also likely to frustrate. On the surface it looks like an absolutely brilliant piece of American Indie cinema, but look a little closer and it appears like director, Benh Zeitlin (Glory At Sea, The Origins Of Electricity)

Set in the southern Delta community simply known as The Bathtub, Beasts Of The Southern Wild follows a young girl known as Hushpuppy (Quvenzhane Wallis – newcomer) and her father, Wink (Dwight Henry – newcomer) who call this ‘wilderness’ home.

When a massive storm hits the area and leaves it under water the residents including an extremely sick Wink decide they are staying putting… no matter what ‘beasts’ the storm has awoken. While the rest of America tries to help the small community, the residents take things into their own hands while Hushpuppy starts asking questions about her mother.

Early on Zeitlin hits the mark. The manic style of filmmaking he uses as Hushpuppy runs through The Bathtub is creative and original; he even manages to create a fair bit of suspense as the storm hits. All the film’s problems lie after that dramatic event.

Firstly, the character of Wink becomes increasingly unlikable. There’s wanting to stay where your home is and then there is putting your child in severe risk. Sadly, his choices do the latter and as a result the audience no longer feels sorry for him, and in this kind of film that is an important thing to have happen.

It is also at this time that Zeitlin decides to introduce the ‘beasts’ to the audience. Again it is a completely creative idea, but the question must be asked, are they really necessary? After all who, if anyone, can actually explain what they are all about? In fact at times it seems like they almost get in the way of the story at hand.

At least the acting of Beasts Of The Southern Wild does in fact save the film. Dwight Henry overcomes the negative aspects of his character by putting in a fine, award deserving, performance, while young Quvenzhane Wallis shows all child actors just how to go about this acting caper. Her performance is breathtaking and she certainly shows that she has a huge career ahead of her.

Beats Of The Southern Wild is an interesting watch, just be warned that sometimes the alternative style of the film does dangerously get in the way of the story.