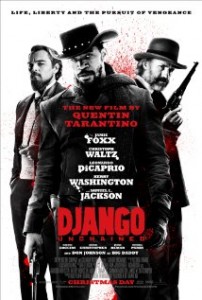 Summary: Set in the South two years before the Civil War, Django Unchained stars Academy Award®-winner Jamie Foxx as Django, a slave whose brutal history with his former owners lands him face-to-face with German-born bounty hunter Dr. King Schultz (Academy Award®-winner Christoph Waltz).  Schultz is on the trail of the murderous Brittle brothers, and only Django can lead him to his bounty.  The unorthodox Schultz acquires Django with a promise to free him upon the capture of the Brittles – dead or alive.

Success leads Schultz to free Django, though the two men choose not to go their separate ways.  Instead, Schultz seeks out the South’s most wanted criminals with Django by his side.  Honing vital hunting skills, Django remains focused on one goal: finding and rescuing Broomhilda (Kerry Washington), the wife he lost to the slave trade long ago.

Django and Schultz’s search ultimately leads them to Calvin Candie (Academy Award®-nominee Leonardo DiCaprio), the proprietor of “Candyland,” an infamous plantation.  Exploring the compound under false pretenses, Django and Schultz arouse the suspicion of Stephen (Academy Award®-nominee Samuel L. Jackson), Candie’s trusted house slave.  Their moves are marked, and a treacherous organization closes in on them.  If Django and Schultz are to escape with Broomhilda, they must choose between independence and solidarity, between sacrifice and survival.

Remember the Western genre? The genre of film that your Dad used to pull out and make you watch when you were a kid. A genre full of John Wayne and Clint Eastwood in his early days? Well now Quentin Tarantino has taken the whole genre and turned it on its head with ‘Django Unchained’ a sensational film that already puts its hand up for film of the year.

The film opens with Django (Jamie Foxx – Horrible Bosses, Rio) being forced to walk across a freezing landscape as part of a slave chain gang. But then he is rescued by a dentist-come-bounty hunter, Dr. King Schultz (Christoph Waltz – Carnage, The Three Musketeers) who wants Django to help him track down two cruel slave owners that have a bounty on their head.

Schultz offers Django a deal, if he will help point out the two wanted men he will teach him to shoot, will give him a freedom and will also help to hunt down his wife, Broomhilda (Kerry Washington – A Thousand Words, TV’S Scandal). With the first part of the deal done Django and Schultz learn that Broomhilda is now owned by the cruel and nasty Calvin Candie (Leonardo DiCaprio – J. Edgar, Inception) is supported by his workers including his loyal man-servant Stephen (Samuel L. Jackson – Zambezia, The Avengers) and the rough-and-ready Billy Crash (Walton Goggins – Officer Down, Lincoln).

Tarantino’s script is brilliant from start to finish. The dialogue flows so well that even dialogue scenes seem to just flow by quickly while the tension that Tarantino manages to develop throughout the film draws the audience right in. The fact that he has created ‘good guys’ that the audience can’t help but like only enhances that tension when they find themselves in danger.

‘Django Unchained’ does has your typical Tarantino style which means it is extremely violent, so violent in fact that the shootout at Calvin Candie’s mansion must have ‘bled’ dry the fake blood supply in holiday. And while some have criticized the amount of violence and the use of the magic ‘n’ word in the film it doesn’t take a brain surgeon to work out that those are two of the things that make the film’s natural feel so realistic.

Of course like many of Tarantino’s films the wonder director once again brings the best out in his cast. Christoph Waltz pulls out a remarkably display of character acting while Leonardo DiCaprio seems to morph into Jack Nicholson as he relishes the chance to play the vile Calvin Candie. And if you’ve never been a fan of Jamie Foxx then this is the film that will win you over.