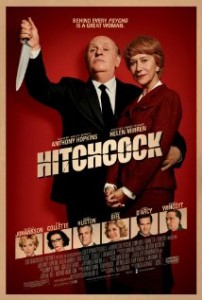 Summary: HITCHCOCK is a love story about one of the most influential filmmakers of the last century, Alfred Hitchcock (Anthony Hopkins) and his wife and partner Alma Reville (Dame Helen Mirren). The film is but a snapshot of their journey through the making of Hitchcock’s seminal film ‘Psycho’.

Over recent years ‘My Week With Marilyn’ and ‘Me And Orson Welles’ have both shown that a movie about the making of another movie can make for some great storytelling and can also allow for an actor to step up and brilliantly portray a past cinematic legend.

Now comes ‘Hitchcock’ a film that centres around the life of Alfred Hitchcock (Anthony Hopkins – 360, Thor) while he is trying to put together his greatest film of all time ‘Psycho’. Hitchcock is at a loss at what to do after the release of his film ‘North By Northwest’. Much to the surprise of his wife, Alma Reville (Helen Mirren – The Door, Arhtur) and assistant Peggy Robertson (Toni Collette – Mental, Jesus Henry Christ) instead of choosing from some of the great stories that are flying around he settles on a trashy novel called ‘Psycho’ and decides to turn it into a film.

With the studios refusing to back the film Hitchcock decides to self-fund the film, but while he is busy working with his cast which includes Janet Leigh (Scarlett Johansson – The Avengers, We Bought A Zoo), Vera Miles (Jessica Biel – Emanuel And The Truth About Fishes, Playing For Keeps) and Anthony Perkins (James D-Arcy – The Making Of A Lady, The Domino Effect) he is horrified to see how close Alma is getting to fellow writer, Whitfield Cook (Danny Huston – Stolen, TV’S Magic City).

To his credit director, Sacha Gervasi (Anvil: The Story Of Anvil) certainly doesn’t make ‘Hitchcock’ a fluff piece about the great film. Instead he shows a warts and all view of Hitchcock, a man who never paid enough attention to his wife and could be an absolute bastard to his leading ladies… what it did show however was just how determined he was to see a film through and that he was a man that certainly loved cinema.

So good is the writing of ‘Hitchcock’ that it is the kind of film that really captivates its audience despite the fact that most film fans would know that yes ‘Psycho’ did eventually make it to the cinema and became a big success. Audience members beware though you will certainly get a lot more out of the film if you know a little bit about Hitchcock’s career, otherwise things such as the crow landing on Hitchcock will have no kind of meaning at all.

Perhaps the best part of ‘Hitchcock’ though is the acting of the leads. Anthony Hopkins is brilliant as Hitchcock while he is well supported by Helen Mirren. Also impressive is Jessica Biel (who reminds audiences that she can in fact act after the woeful ‘Total Recall) and Scarlett Johansson who seem to both thoroughly enjoy getting to play a couple of screen legends.

‘Hitchcock’ is a great film that is a must see if you are a fan of Alfred Hitchcock and his film ‘Psycho’.

Other Subculture Media Reviews of ‘Hitchcock′: Check Episode #15 of our The Good The Bad The Ugly Podcast for a more in-depth review of ‘Les Miserables’. You can also check out our other review on Helium