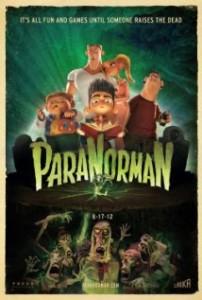 Summary: In ParaNorman, a small town comes under siege by zombies. Who can it call? Only misunderstood local boy Norman , who is able to speak with the dead. In addition to the zombies, he’ll have to take on ghosts, witches and, worst of all, moronic grown-ups, to save his town from a centuries-old curse. But this young ghoul whisperer may find his paranormal activities pushed to their otherworldly limits.

There have been some pretty good animated ‘horror’ films surface this year with the adequate ‘Hotel Transylvania’ and of course the brilliant ‘Frankenweenie’. Now comes ‘ParaNorman’ a lovely to look at animated film with a story that is guaranteed to captivate people of all ages.

‘ParaNorman’s’ plot centers around Norman (voiced by Kodi Smit-McPhee – ‘Dead Europe’, ‘Let Me In’) a young loner who feels that is Mum, Sandra (Leslie Mann – ‘This Is 40’, ‘The Change-Up’), and father, Perry (Jeff Garlin – ‘Sin Bin’, ‘Safety Not Guaranteed’), don’t understand him and that his sister, Courtney (Anna Kendrick – ‘Pitch Perfect’, ‘End Of Watch’) hates him for being a freak. In fact Norman is in fact easy pickings for bullies like Alvin (Christopher Mintz-Plasse – ‘Movie 43’, ‘Pitch Perfect’) because he appears to be a weirdo that talks to himself, but instead Norman sees the dead, like his Grandmother (Elaine Stritch – Romance & Cigarettes, TV’S 30 Rock), and can have conversations with them.

To Norman it’s always just been an annoying curse his life but when his banished uncle, Mr. Prederghast (John Goodman – ‘Trouble With The Curve’, ‘Argo’) warns him that upon his death he will be the only one that will be able to prevent the evil witch Aggie’s (Jodelle Ferland – ‘Midnight Rider’, ‘Home Alone: The Holiday Heist) curse from coming to life and wreaking havoc on his town he can’t help but wonder what trouble his gift is going to get him into.

The key to ‘ParaNorman’ working so well is because the directors Chris Butler (newcomer) and Sam Fell (‘The Tale Of Despereaux’, ‘Flushed Away’) have made it look absolutely amazing by using the modern version of stop animation but also embracing a look that matches so many of the old style horror movies that it pays tribute to.

Likewise the story works well and it will appeal to an audience of all ages, although parents of young children should be warned that some of the more supernatural scenes are likely to scare the younger audience members. In some ways ‘ParaNorman’ is an animated films for adults and you can’t really complain about that.

The voice cast also do a sensational job. Aussie Kodi Smit-McPhee does well putting on an American accent and falls into character well although the standout is clearly John Goodman who takes his role of Mr. Prenderghast and really runs with it.

‘ParaNorman’ is the kind of film that will be loved by anyone that enjoys a good animated film or has an interest in old school horror film.