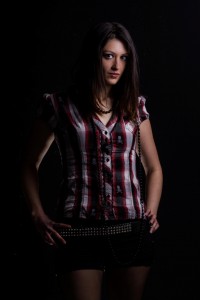 Rachel Aspe was recently announced as the new singer for ETHS in April. The vocalist made her live debut with the Marseille-based metal band April 10th at Le Ninkasi Kao in Lyon, France.

Rachel Aspe first made her international debut on prime time television as part of “La France A Un Incroyable Talent” (the French equivalent/franchise of “America’s Got Talent”). Rachel’s death metal vocal styling stunned the judges and crowd before going viral and being seen by millions of people. Video of her audition has been widely covered by such international sites such as ABC News, MSN, The Guardian, Huffington Post, Salon, and dozens more. Footage can be found here.

Rachel commented on joining ETHS, saying: “I’m really proud to be a part of ETHS. I’ve been a fan of the band for many years, and it’s a great honor for me to sing songs I have been listening to for such a long time.”

Regarding their new band member, ETHS stated: “We’re pleased to welcome Rachel to the band. She’s great and has an awesome voice! Thanks a lot to Virginie and Nelly for filling in on stage during the last few months. Now a new chapter is beginning for ETHS. We’re energized and looking forward to our upcoming shows with Rachel. See you on the road!”

In addition to welcoming Rachel to the band, ETHS have announced a string of tourdates including the prestigious Dour Festival in Belgium!