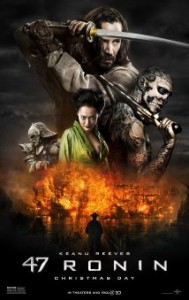 Summary: An 18th century set story centered on a band of samurai who set out to avenge the death of their master.

Sometimes when you read other people’s reviews you wonder if they have seen the same film as you. There have been some reviewers that have savaged director Carl Rinsch’s debut feature film “47 Ronin.” These savage reviews have sunk the film and to date it has only made back $36 million of the $175 million it cost to make.

After viewing the film it’s hard to work out why the critic’s claws were out so hastily. Sure this film isn’t a masterpiece but it’s certainly not the dog you would expect from reading some of the early reviews. In fact if you have a bit of a love for Asian cinema you would certainly describe this film as passable.

Based loosely (and I should say very loosely) on a Japanese legend “47 Ronin” centres around Kai (Keanue Reeves) a half breed demon cross human who serves his Lord Asano (Min Tanaka) with as much bravery and honor as the other samurais but is never accepted by them. In fact many, including the leader Oishi (Hiroyuki Sanad), despise and do not trust him. The only person who shows any kindness towards Kai is the beautiful princess Mika (Ko Shibasak) who has romantic feelings for him.

The whole land whoever finds itself in upheaval after the evil Lord Kira (Tadanobu Asano) and his concubine witch act out a plot that sees Lord Asano put to death by a Shogun who has been blinded by the treachery. Soon, despite warnings not to, Oishi decides to avenge the death of his Lord in order to free the people and rescue Mika. But the only way to do that is to put his feelings aside and work with Kai.

As far as story and action goes the film works. A lot of the violence that you would normally expect in a samurai film has been toned down to give the film a lower classification but there is never a point during the film when you feel yourself getting bored or getting angry. In fact the story does draw you in, you like Kai (despite the fact that he never manages to crack a smile during the film) and as a result you want to see him achieve his goals. In a lot of ways “47 Ronin” is your traditional guy-needs-to-kill-the-evil-to-get-the-girl story, and that is a form of storytelling that has served writers well for thousands of years now.

Despite its entertainment value though there is one glaring thing that holds back “47 Ronin” completely – and that is the fact that it has been so Americanised. It seems strange when you think that this story is a Japanese legend that a white American actor has the lead, so when you dig a little deeper into the legend you find out that the character of Kai was not the lead in the original legend, that role actually went to Oishi. It does seem a little disrespectful to change a culturial story just so an American actor can be cast in the film. Some reviewers may have thought that the fantasy element of the film dragged it down, that’s not the fact though, the only thing that does that is the lame attempt to Americanise the film.

Speaking of that American lead Keanu Reeves doesn’t do a lot wrong. Sure he’s no Tom Cruise in “The Last Samurai” but he has his pouts and angry looks down to a tee, while his dishevelled look makes him look a lot like former Australian tennis player Pat Rafter. While Reeves was good he is out heroed by Hiroyuki Sanada who backs up his recent great performance in “The Railway Man” with a good action hero performance. He is certainly a lot better than some of the Asian actors who struggle to match the skills of their leads.

“47 Ronin” may have its odd clichéd moments and of course doesn’t look as good as a Peter Jackson epic but this is still a decent action film that certainly won’t disappoint those that like a good samurai film.

Other Subculture Media Reviews of ‘47 Ronin′: Please check The Good The Bad The Ugly Film Show Ep #65 for our full 47 Ronin review.