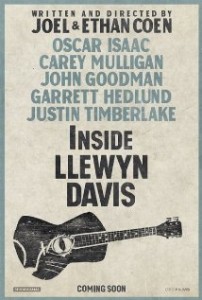 Summary: Shambolic and and self-absorbed, Llewyn (Oscar Isaac) is a penniless musician trying to make it as a solo artist. Roughing it on the couches of barely sympathetic friends, he scores the occasional gig at a bar in Greenwich Village but struggles to break through despite earlier success with his former musical partner Mike. Things go from hapless to hopeless when Llewyn discovers that his fling with married songstress Jean (Carey Mulligan) has resulted in a very unwanted pregnancy..

OUR INSIDE LLEWYN DAVIS REVIEWS & RATINGS:

Please check Greg’s review of ‘Inside Llewyn Davis’ that is available on http://www.filmreviews.net.au/

“Inside Llewyn Davis” is a strange film. Not strange in the Terrence Malick-you’ll-never-understand-this-in-a-million-years way but strange in the sense that the Coen Brothers seem to want to break so many film making laws with the film that is should be universally despised. Instead it turns out to be a warm film that slowly grows on its audience.

The film follows Llewyn Davis (Oscar Isaac) a down on his luck musician who dreams of one day making it big, despite the fact that everything he touches turns to crap. He has no home and instead just drifts from couch-to-couch, whether it be the rich couch of Mitch Gorfein (Ethan Phillips), that leads to an adventure with their cat, or the couch of his musician buddy, Jim (Justin Timberlake).

Just when it seems that is life couldn’t go lower Llewyn discovers that he has now got Jim’s partner Jean (Carey Mulligan) pregnant and his new album is making no money at all. Faced with the fact that he needs to make money fast for Jean’s abortion he tries one last desperate bid to get his career on track.

The Coen’s have bad “Inside Llewyn Davis” a slow film but they also seem to do the impossible and make a film likable where all the characters are unlikable. Llewyn is far from likable, yet for some reason you find yourself barracking for him to get somewhere in life. Then there is a Jean a bad tempered character whose easy stance on abortion will sit uneasily with some audience members. Yet there is something in the power of the Coen’s writing that makes you want to like this film. Characters such as the heroin addicted, foul-mouthed jazz musician Roland Turner (John Goodman) may be unlikable but they sure are memorable.

“Inside Llewyn Davis” is also one of those films that strangely makes you realise (after the credits have rolled) that not much actually happened throughout the film, yet for some reason it never, ever gets to the point where it is boring. The story meanders its way through a short period of Llewyn’s life and the journey is made sweeter by the fact that it contains a dreamy folk music soundtrack that is enhanced by the great vocal stylings of Oscar Isaac, Justin Timberlake and Adam Driver. If you don’t like folk music however then you don’t stand a chance of being drawn into this film.

As is the case with most Coen brothers films the film is brilliant cast. Isaac excels in a challenging role that sees him having to not only act but sing songs in their entirely, yes in a way this film is a musical. Carey Mulligan and Justin Timberlake are serviceable yet underused in their roles while just like so many of his recent films John Goodman steals the show playing an over-the-top character that just sadly seems to peters out as the film goes on.

This is very much a film that will divide audiences and critics alike. Some will like it’s alternative style of story-telling while others will feel that the fact it goes around in one big circle and doesn’t really go anywhere makes it very, very annoying. “Inside Llewyn Davis” is an acquired taste but it is one that I quickly warmed to.

Other Subculture Media Reviews of ‘Inside Llewyn Davis′: Please check The Good The Bad The Ugly Film Show Ep #65 for our full 47 Ronin review.