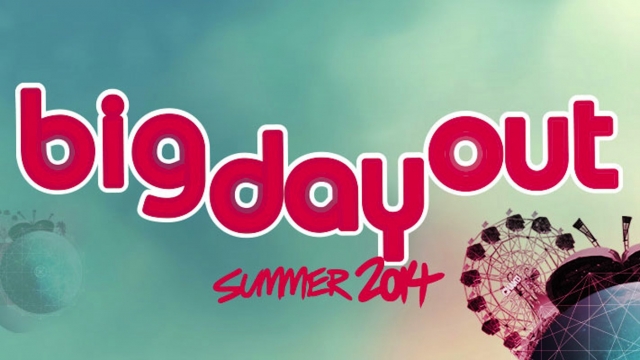 Just a week after the temperatures peaked into the mid-forties Melbourne decided to put on an overcast drizzly day for Big Day Out 2014… well let’s be honest it poured if you were there in the first couple of hours. The good news is though the weather in no way dampened how good the musical talent was on the day. In fact so the acts on the day used this year’s Big Day Out to put a foot forward in their career while others wound back the clock and reminded us of days gone by.

Arcane Saints – They may have been of the first bands on for the day (poor guys were put on at 11am in the morning) but that didn’t stop Melbourne’s own Arcane Saints putting in one of the best performances of the year. Let’s be honest Arcane Saints are on a real role, their 2013 Turning The Tides album was undoubtedly one of the albums of the year, and it was pleasing to note that they didn’t allow performing at Big Day Out over awe them. These guys were on song from the very beginning and as they delivered tracks like ‘Never Say Die’ and ‘Hard To Please’ it was once again easy to see why they deserve to be listed as one of Australia’s most promising bands. They even through in a Stone Temple Pilots’ cover for good measure. Yes despite there being some good heavy bands on the bill at this year’s Big Day Out Arcane Saints outshone them all.

Let’s Not Pretend – Another Melbourne band that managed to deliver the goods at Big Day Out was Let’s Not Pretend. It’s actually no surprise that they chose to cover Blink 182’s ‘All The Small Things’ because their set revealed them to be a blend of rock and pop that certainly have the potential to go all the way. Let’s Not Pretend delivered a great mix of some solid rock tracks and a ballad – ‘I Can Dream’ which certainly showed these guys are a talented bunch just waiting for a chance to break out. Their track ‘Is This Love’ had the Big Day Out crowd jumping, while their set showed that their mix of rock with an electronic blend would easily be enough to win over people who love bands like Simple Plan and Fall Out Boy.

Altitude – Altitude took the trip up to Melbourne’s Big Day Out from Geelong and it certainly wasn’t a wasted trip. Their bass guitarist, Luke Reeves, wore a T-Shirt boasting that ‘Rockstars Never Die’ and that certainly could have been the case for Altitude who whipped their crowd into a frenzy with their own style of fuzzy grunge while calling upon the styles of some rockstars of the past. Their lead singer mixed grunt and melody in the vein of Kurt Cobain which certainly made their style of grunge standout from a lot of the other bands around at the moment. Their tidy set certainly made them a band you should check out if they are playing locally to you.

Audemia – The highway from Geelong also delivered four piece heavy rockers Audemia to Big Day Out… and again they were a band that shone on the big stage. Chosen by Triple M’s Music Jury to perform Audemia capitalised on the chance to play at a big festival and they certainly didn’t let those down that had faith in them. Sounding a lot like Metallica the band quickly drew a crowd and then kept them there with a set full of grunt with tracks like ‘The One’ and the slowed down ‘Friends’ certainly being crowd pleasers. Audemia’s set certainly won them a few more fans at Big Day Out and made their believers proud.

The Algorithm – The purists will hate hearing this but the hardest working drummer of the day belonged to French outfit The Algorithm. The main star of The Algorithm is supposed to be DJ/producer Remi Gallego but he was clearly outshone by his drummer at Big Day Out who put in some of the most furious drumming that you are ever likely to see. Mixing metal with dubstep electronic may not be everybody’s cup of tea but these guys certainly had the crowd hyped, on their feet and occasionally even whipped them into a frenzy. Brutal at time The Algorithm pounded their way into the hearts of those that managed to catch what turned out to be one of the sets of the day. The Algorithm also showed that the French do indeed have a sense of humour constantly teasing their audience with snippets and threats of bad 80s pop.

The Hives – Probably one of the biggest surprises of Big Day Out 2014 came from a band that technically shouldn’t have even been there. The Hives were a late ring-in for Blur who were forced to pull out of the line-up, but obviously someone forget to tell front-man Howlin’ Pelle Almqvist that they were just blow-ins because he was determined to win the crowd over from the moment they hit the stage with the short and sweet ‘Come On.’ Actually it seemed like the Swede was in the mood to play the role of the puppet master just like the one that overshadowed the band on their back-drop.

If that was there plan for the Big Day Out crowd then they certainly delivered. The often underrated garage punkers with a – excuse the pun – hive of activity as they dashed around the stage in their smart matador outfits. It literally felt like they came, saw and conquered as they breezed through tracks like ‘Take Back The Toys’ and ‘Won’t Be Along’ while of course the crowd were only too eager to join in on one of The Hives’ biggest radio hits ‘Walk Idiot Walk.’

It was obvious that Almqvist’s pompous attitude was just a stage act and luckily that was the case because otherwise an Aussie audience certainly wouldn’t warm to him the way they did. The audience anticipation plus the fact the Swedes are one of the best live bands in the world soon reached absolute crescendo with a drawn out version of ‘Tick Tick Boom’ during which time Almqvist broke the big Big Day Out rule of ‘no crowd surfing’ and then made the crowd his ‘dogs’ when he got them to sit and stand on command.

While some bands have the crowd eating out of their hands when they deliver a set as intense and fun-loving as The Hives did they deserve to have them doing more than that.

Beady Eye – One of the most unexpected performances of Big Day Out 2014 was the brilliant performance of Beady Eye. A lot of people worldwide have simply seen Beady Eye as Liam Gallagher’s last bid attempt to try and keep something of Oasis still alive, but that belief was put to rest by a performance that will stay in the mind of the BDO crowd for a long time to come.

Gallagher seemed to take to the stage like a man on a mission. He seemed refreshed (looking trim, taught and little like Robbie Williams), sure some of the old-school Gallagher attitude was there – first when he couldn’t help but make a little gibe about The Hives’ crowd participation and then when some loser decided to throw a shoe at him mid set (which made the crowd have a laugh when Gallagher snarled “if you’re going to throw a shoe at me make sure it’s more expensive than the ones I am wearing), but for the most it appeared to be a brand new Gallagher on stage. For the most part he was friendly with the crowd, focussed on his brown tea-towel he had with him for some reason and thankfully hell bent on delivering a great show.

Teaming up with former Oasis band mates Gem Archer, Andy Bell and Chris Sharrock Gallagher delivered and number of tracks from throughout Beady Eye’s short history including ‘Soul Love’ which admittedly sounds a little ordinary on their new album but actually sounds sensational live. But the highlight of their show was certainly when they captured the magic of the past and delivered two of Oasis’ biggest hits – ‘Rock ‘n’ Roll Star’ (which hails from Oasis’ first album Definitely Maybe) and then the crowd favourite ‘Morning Glory.’ Beady Eye’s version of ‘Morning Glory’ was heavy, powerful and showed that these guys still have what made them part of one of Britain’s most famous bands of all time. Certainly the Big Day Out crowd picked up on at because for those five minutes they were the most energetic they had been all day… the jumping was so full on the crowd literally shook.

Pearl Jam – This year’s headline act at Big Day Out 2014 was Seattle’s favourite sons Pearl Jam. As the minutes ticked by hearalding the end of Arcade Fire’s set (that seemed to go on forever) the crowd in front of the blue stage swelled to the point of overflowing. Crowds grabbed any vantage point possible, from the roof of the nearby bar right through to the grass and walkway beyond the regular stage area. There was a quietness come over the large crowd as everybody it seemed was expecting something special to happen at any moment.

And then something special did happen. With a flash of the stage lights Jeff Ament, Stone Gossard, Mike McCready, Matt Cameron and the legendary Eddie Vedder arrived on the stage. Soon Pearl Jam was giving everybody a rock ‘n’ roll lesson and for those that were Pearl Jam virgins soon learned that you haven’t seen (or heard) Pearl Jam properly if you haven’t seen them live.

Some may question whether or not Pearl Jam are hard rockers but Vedder and co certainly showed the Melbourne crowd that it is a badge they wear with honor. From the moment they hit the stage with ‘Why Go’ Pearl Jam were full of an aggression that had reached an absolute peak when they finally reached their recent single ‘Mind Your Manners’ which Vedder joked was aimed at the ‘kids out there.’

The kids it seemed were having a great time. The crowd were wanting to break the ‘no moshing’ regulation while Pearl Jam’s on-stage friends and family (which seemed to outnumber Snoop Lion’s entourage) watched on as the band put on an absolute clinic.

Vedder chugged at his wine as Pearl Jam delivered a set that covered most of their greatest hits – ‘Jeremy,’ ‘Daughter’ and ‘Better Man’ etc – while also delivering things as varied as a MC5 cover – ‘Kick Out The Jams’ – and ‘Setting Forth’ which was one of the famous Eddie Vedder solo tracks from the Into The Wild soundtrack.

In total Pearl Jam brought 26 tracks to the audience and never once let up the energy or intensity. Yes it was the perfect end to Big Day Out 2014.