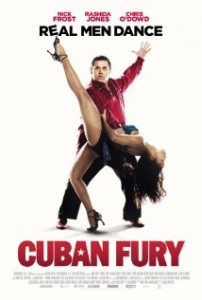 Summary: A former salsa prodigy attempts a comeback years after his career was ruined by a rival dancer.

After the disappointment that was The World’s End last year actor Nick Frost really owes his fans something special. While there have been the obvious films such as Hot Fuzz and Shaun Of The Dead that have seen Nick Frost at his best, he also manages to surprise cinema goers every now and then with surprise hits like Attack Of The Block. Now comes Cuban Fury a film that certainly isn’t a masterpiece, but a film that is just likable to make it a crowd favourite.

Frost plays Bruce Garrett a lovable loser in life who in his junior days was a champion salsa dancer. During that period he was known for his heels of fire and his coach, Ron Parfait (Ian McShane) led him and his dance partner, his sister Sam (Olivia Colman) to dance title after dance title. But then Bruce’s life changed forever when he found himself bashed by a gang who took exception to his sequin shirt that he was wearing to the National Championships. At that moment Bruce turned his back on his dancing career and made a vow to never salsa again.

Flash forward quite a number of years and Bruce know works for a company that designs industrial lathes. He enjoys his life but there isn’t much for him to do. He works, hangs out with Sam at the bar that she works in and then once a week catches up with his loser friends and plays golf with them.

But then suddenly something comes into Bruce’s life that gives it meaning again – his new boss Julia (Rashida Jones). While Bruce wants to win the hand of the fair maiden he finds himself constantly put down by his arch rival in love, the bully Drew (Chris O’Dowd) and finds himself believing that there is no possible way he can win her affection. It is then that he discovers Julia has a love for salsa and wonders whether or not it is possible to capture that old magic once again.

Director James Griffiths (who is mostly known for his television work) really has found himself at the helm of a safe film when it comes to Cuban Fury. Screenwriter, Jon Brown has handed him a script that is full of clichés but also has that winning formula that has made a few dime-a-dozen comedies work over the years. Yes Cuban Fury isn’t the kind of film that will win awards or win over the serious cinema goer but will certainly entertain your average popcorn set film fan.

Brown’s script is interesting. It is sign-posted within an inch of its life but at the same time manages to throw up in just enough laughs to lure the audience in and having them chuckling along with the film as it goes. Film buffs that have seen a lot of films over the years will be able to pick exactly where this film is going from scene-to-scene but at the same time they won’t be disappointed as the laughs are more than enough to keep them entertained.

The saddest thing about the script of Cuban Fury though is at times it does hold back its cast. Rashida Jones, Olivia Colman, Ian McShane and Kayvan Novak (who play extremely stereotypical gay Arab, Bejan) are given so little to do during the film that they don’t even have to raise a sweat as they breeze through their lines. However the script doesn’t seem to handicap the comedic abilities of its two leads though. Chris O’Dowd seems to relish being able to play the bully-boy while Frost overcomes the fact that he has one of the least dancer-like bodies in the history of cinema to deliver a lovable performance. The dance-off between O’Dowd and Frost is one of the highlights of the film.

Cuban Fury overcomes its clichéd script to become a watchable beer-and-pizza comedy that will be enjoyed by men and women alike. There’s also a brief appearance by Simon Pegg for all the fans of The Cornetto Trilogy.