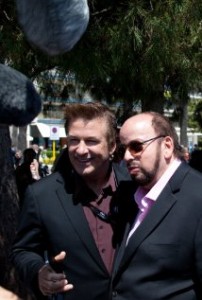 Summary: Alec Baldwin and filmmaker James Toback are on a mission: to remake Bernardo Bertolucci’s legendary 1972 film Last Tango in Paris by setting it in Iraq in the mid-2000s. Hobnobbing their way around Cannes, the wisecracking duo meet up with a who’s who of the film industry , including Francis Ford Coppola, Martin Scorsese, Ryan Gosling and Bertolucci himself, as they try to find money, a script and a cast for their impossible idea.

Seduced and Abandoned is the delightful and utterly uncategorisable new pseudo-documentary from veteran director James Toback. A riff on the harsh economics of modern film turned unlikely buddy comedy, it’s a glimpse into the funny film business and a gleeful homage to a lost time when film was made for film’s sake.

OUR SEDUCED AND ABANDONED REVIEWS & RATINGS:

Seduced And Abandoned is a hard documentary to explain. Not just for this lowly reviewer but you get a feeling that even the guys responsible for this film may have some trouble trying to pinpoint what the exact focus of this documentary actually is. This reeks as the kind of film that may have sounded like a good idea when a group of friends got together over a few drinks, but sadly when it reaches the big screen it becomes a meandering film that was well deserved of the walk outs it received at the screening I was at.

At the heart of Seduced And Abandoned are film director James Toback (Tyson, When Will I Be Loved) and actor Alec Baldwin (Blue Jasmine, TV’S 30 Rock) who have come up with the idea of remaking the classic Last Tango In Paris but setting it in Bush-era Iraq. It seems the original concept of the documentary was show them travelling to the Cannes Film Festival on a mission to receive backing for the film, but somewhere along the way the film got railroaded and ended up becoming a look at the history of the Film Festival itself and also how the likes of Ryan Gosling, Roman Polanski and Martin Scorsese got their starts in Hollywood.

One of the things that makes Seduced And Abandoned such a strange documentary is that seems that Baldwin and Toback really wanted this to be the kind of film that really celebrates cinema. Certainly that seems to be what is happening when they sit down and talk to Polanski, Scorsese, Francis Ford Coppola and Bernardo Bertolucci, but during the film it actually begins to show the darkside of the industry – a side where people such as Neve Campbell and Oscar winner  Berenice Bejo find themselves as being described as ‘unmarketable.’

If Toback and Baldwin wanted Seduced And Abandoned to showcase themselves in the realm of a vanity piece then they certainly failed in their mission. Instead Toback comes across as a pushy director who believes that he deserves to be credited alongside the Scorseses and Coppolas of this world while Baldwin seems to be an actor who refuses to acknowledge that he is no longer a Hollywood leading man. At times this comes across as a poorly directed and cheaply edited wank fest, although it is kind of fun to watch as Baldwin gets put in his place by several producers and even an Australian film distributor.

Having said that though there are some highlights during Seduced And Abandoned. Hearing the likes of Ryan Gosling and Diane Kruger talking about what it means to be an actor in Hollywood these days is an interesting piece of cinema, as is hearing some of the legendary directors that we all look up to talking about their careers and what film-making means to them. Those interviews are absolutely priceless for young filmmakers out there.

Seduced And Abandoned ultimately fails at its major goals and is only made watchable by a couple of interviews that touch on some cinematic magic.

Other Subculture Media Reviews of ‘Seduced And Abandoned′: Nil.