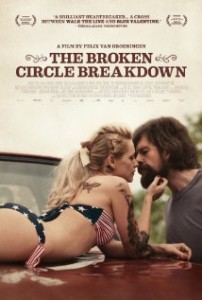 Summary: Director Felix Van Groeningen introduces two star-crossed lovers: Didier, a musician, and Elise, a tattooed singer. Music resonates throughout the film and their passionate relationship. They even name their daughter Maybelle, after a famous country singer. But when Maybelle is diagnosed with a serious illness, the couple cope differently.

Films as dramatic and as intense as The Broken Circle Breakdown are few and far between. Often when a director is given a deep topic such as a child battling illness they avoid the issue of upsetting their audience by holding back and making the film in a Mills & Boon style – the topic is touched upon but it is in a light and fluffy way. That certainly isn’t the case for one of the latest films out of Belgium, The Broken Circle Breakdown.

Based on theatre piece written by Johan Heldenbergh and Mieke Dobbels The Broken Circle Breakdown revolves around the relationship of Didier Bontinck (Johan Heldenbergh – Come As You Are, TV’S De Riddler) a musician who celebrates everything American, especially bluegrass music, and Elise Vandevelde (Veerle Baetens – Halfweg, TV’S Cordon) a tattoo artist he meets by chance.

Perhaps the strangest thing about this film is that the style that director Felix van Groeningen (The Misfortunates, With Friends Like These) has decided to use to tell the story is both its biggest weakness and its greatest strength. At times the criss-crossing of the time periods throughout the story does become annoying but then as the film finishes you realise that once you have seen the whole story play out everything fits together like a jigsaw puzzle. The audience may find themselves feeling a little lost at times but stick with it because there is a handsome reward for those brave enough to watch this film through to the end credits.

The screenplay does allow for this film to become harrowing at times. If watching Maybelle get sicker and sicker isn’t gut wrenching enough then watching Didier and Elise self-destruct on each other certainly is. The intensity of the scenes shared between the two as their relationship collapses is emotional and confronting, but it is also what makes this such a brilliant film as well. The fact that the film also doesn’t try and take its audience into a ‘nice’ place is a welcome relief from the Hollywood fluff that most cinemas like to serve up to its patrons.

The Broken Circle Breakdown’s script also doesn’t miss its point with tackling some other deeper issues. Watching Didier’s love of America slowly disintegrate as he watches President Bush denounce the use of stem-cell research takes this film to a whole new level, as does his five minute tirade against religion mid-concert as his confused audience and emotional band-mates watch on. It’s moments like these that you realise that cinema is still one of the most powerful ways for a person to get their message across to the masses.

Credit must also be paid to the lead actors, Johan Heldenbergh and Veerle Baetens, for their performances in bringing this amazing screenplay to the screen. Heldenbergh seems to become totally taken over by his character throughout the film and when he is called upon to show real emotion and anger on the screen he does so with a brilliance that would have earned an American actor as Oscar for their performance. Heldenbergh knows there is more to showing anger on screen then yelling and stamping your feet and the images of his screaming abuse with spit flying from his mouth will be something that sticks in this reviewers mind for a long time to come. Baetens also puts in a sensational performance as she takes her character Elise from a journey of being the erotic vixen to the heartbroken mother who is watching her world crash down around her.

From the best screenplays to hit cinemas in a long while to two of the most amazing acting performances of 201 there is a lot to like about The Broken Circle Breakdown. Added to that is a sensational bluegrass soundtrack and a gritty ending that shows that some filmmakers are still willing to take chances. This surprise hit is one film that serious film lovers shouldn’t overlook in 2014.

Other Subculture Media Reviews of ‘The Broken Circle Breakdown′: Please check our full The Zero Theorem review on The Good The Bad The Ugly Film Show Ep #79