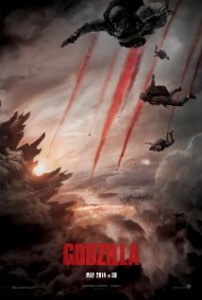 Summary: The world’s most famous monster is pitted against malevolent creatures who, bolstered by humanity’s scientific arrogance, threaten our very existence.

Adam Ross: You can check out Adam’s Godzilla review on The Good The Bad The Ugly Film Show Ep #79

Nick Gardener: You can check out Nick’s Godzilla review on The Good The Bad The Ugly Film Show Ep #79

Fans of Godzilla films want and deserve a good Godzilla film, after all the poor suffering souls have nothing but a bad taste in their mouth after the 1998 Matthew Broderick led disaster. Well now comes the 2014 update and on the surface it seems that in a rare oddity Hollywood has finally picked the right director to be at the helm of a major project. Anyone that can remember just how good Monsters was will attest to the fact that Gareth Edwards knows how to make a damn fine ‘monster flick.’

This time around we find Joe Brody (Bryan Cranston – Get A Job, Cold Comes The Night) alarmed at the seismic activity going on around the Japanese nuclear power plant where he works. To his surprise nobody seems to take him seriously and the result is a catastrophe that results in the death of many other workers including his wife.

Flash-forward to fifteen years later and Joe’s son Ford (Aaron Taylor-Johnson – Kick-Ass 2, Anna Karenina) is now a bomb expert in the military. He is also married to emergency room nurse, Elle (Elizabeth Olsen – Oldboy, In Secret) and has a young son that his military service takes him away from far to often. It is therefore understandable that he is frustrated when on a rare time at home he receives a call from Japanese authorities informing him that Joe has been arrested entering into a quarantined zone.

After bailing his father out Ford learns that his father believes that the authorities are keeping something secret inside the ‘zone’ and he wants to get inside to find his old data and to see what is going on. Reluctantly Ford follows his father and soon learns that experts, including Vivienne Graham (Sally Hawkins – The Double, Blue Jasmine) and Dr. Ichiro Serizawa (Ken Watanabe – Unforgiven, Inception) have been keeping a very large secret that is about to unleash itself onto the world.

It is easy to see Edwards’ handy work all over Godzilla. His monster sequences are well worth the price of admission, especially the ‘monster fights’ and at times he isn’t afraid to pull the focus away from these battles to show what the humans such as Ford are doing at that time. However while these sequences do look impressive as a whole Godzilla is held back from becoming a great film because of several reasons.

One of the major flaws of Godzilla is the characterisation. While you hardly go into a ‘monster flick’ expecting an epic back story for each character it is disappointing to find that a lot of the characters here in Godzilla are dangerously one dimensional. For example Dr. Serizawa is one of the more interesting characters although very little is learnt about him, then there is the massive under use of Elle, which results in the crime of seeing an award winning actress like Elizabeth Olsen become little more than scenery as she simple watches monsters go by with her mouth open like a Laughing Clown. The lack of characterization causes a problem later on in the film when the audience begins to realise that they really don’t care whether some characters survive the slaughter or not.

Of course though one of the most important things for a film like Godzilla however is what do the monsters actually look? Well Godzilla himself looks fine, Edwards’ team has actually done a pretty good throw back to the Godzilla of old. The same however cannot be said for the other Kaiju monsters that appear in the film, call me an old-fogey but somehow they seem just a little bit too metallic and robotic like for me. Their look makes them look very fake while on the other hand Godzilla’s natural look makes it almost believable that such creatures do live somewhere out there under the sea.

The decent storyline however does allow some of the actors to show their worth though. Bryan Cranston is given some moments to show his dramatic range, a welcome relief after the teaser footage they showed us a couple of months ago made it look like he might have been going for a comedic portrayal of his character, while Aaron Taylor-Johnson pulls on a serious face and actually shows that he may have what it takes to become an action hero in the future. As previously mentioned though some of the cast – especially Elizabeth Olsen and Ken Watanabe – are completely wasted in their one dimensional roles.

Godzilla is certainly far from a bad film. The good storyline and decent action sequences make it a worthy watch and Gareth Edwards should be congratulated for that, but sadly some elements of the script will still leave some serious film lovers wanting more.