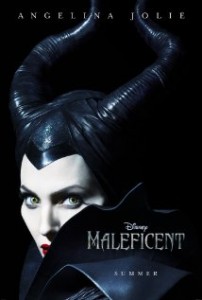 Summary: The “Sleeping Beauty” tale is told from the perspective of the villainous Maleficent and looks at the events that hardened her heart and drove her to curse young Princess Aurora.

Nick Gardener: You can check out Nick’s Maleficent review on The Good The Bad The Ugly Film Show Ep #81

The Hollywood obsession of rebooting famous fairytales continues with Disney’s Maleficent. The trend over the last few years has resulted in some good films such as Snow White & The Huntsman but also some very ordinary films, anybody else remember Red Riding Hood? Therefore as a film fan you find yourself approaching Maleficent with a little bit of hesitance. The good news is there is no reason to because Disney have released a film that deserves two thumbs up.

Technically Maleficent isn’t a reboot it’s simply telling the ‘other side’s’ story of the famous Sleeping Beauty fairytale. The film looks at Maleficent (Angelina Jolie – Kung-Fu Panda 2, The Tourist) aka the wicked witch who cursed the young Sleeping Beauty, Aurora (Elle Fanning – Low Down, Young Ones).

In Maleficent we see what led to those actions as she is left to protect her land from the advances of the greedy King Henry (Kenneth Cranham – The Legend Of Hercules, Closed Circuit) and the pain she if left with after her lover, Stefan (Sharlto Copley – Oldboy, Open Grave) cruelly turns his back on her. We also see her team up with Diaval (Sam Riley – The Dark Valley, On The Road) to try and get revenge on all at hand but her love for Aurora prevents her from being as ghastly as she would like to.

Director Robert Stromberg, who is a first time director but has worked in visual design on some of the world’s best known films and television shows over the years, is almost asked to do the impossible here – that is to make a character who has always been the villain to the audience become someone that film fan’s will warm to. To his credit, and thanks to some help from talented screenwriter Linda Woolverton (Alice In Wonderland, The Lion King), Stromberg manages to pull of this feat wonderfully well, all while creating a film that also looks amazing as well.

Stromberg pulls off his challenge so well that as an audience member you find yourself changing sides very, very easily. Suddenly Maleficent is the good guy and King Stefan is the character that you want to see suffer. Of course knowing that this has to be watched by children means that Stromberg does also bring in some comedic relief to break up the darkness and that mainly occurs with Aurora’s minders – the bumbling fairies (or is that pixies?) Flittle (Lesley Manville – Mr. Turner, The Christmas Candle), Knotgrass (Imelda Staunton – Pride, The Pirates! Band Of Misfits) and Thistletwit (Juno Temple – Horns, Lovelace). The fact that the film manages to make these characters entertaining and not annoying is a feat upon itself.

Maleficent is a film that also looks amazing. Stromberg has created mythical characters that wouldn’t have looked out of place in something like Pan’s Labyrinth and the special effects team has come on board to make the creatures come to life and look spectacular on the big screen. The battle scenes also show that Stromberg is a very visual director and doesn’t always hold back just because he knows that little eyes are watching.

Despite its brilliance though there are a couple of annoying things that occur during Maleficent. The annoying thing is they are so small and can only be put down to lazy filmmaking and screenwriting. Firstly it is never explained why Maleficent can do great feats of magic, including make a tree grow back a branch but can’t do a spell to give herself wings again, and then there is a fact that at one moment the Narrator (Janet McTeer – Hannah Ardent, The Woman In Black) is calling Flittle, Knotgrass and Thistletwit fairies and the next moment pixies. Surely somebody must have noticed that happening during the filmmaking process somewhere along the line.

You do have to feel a little sorry for Elle Fanning in Maleficent. She seems to float along playing Aurora, and while she is one of the heroes of the film is not really given much to work with, except for the direction of ‘look cute.’ No this is very much an Angelina Jolie film and boy does she step up to the plate. Jolie delivers a full range of acting emotions and more importantly makes Maleficent a likable character while she is still really the ‘villain’ at heart. While it is difficult to compare her work here to what she has done in films such as Girl, Interrupted this is certainly one of the better films in her career. A shout out must also be paid to Sam Riley who also seems to steal a lot of the screen time that he is given.

Dark yet beautiful Maleficent is certainly one of the surprise hits of 2014. While many may have dismissed this as a family film it ends up being a brilliantly made film that once again captures that magic that Disney has been known for in the past.

Other Subculture Media Reviews of ‘Maleficent′: For our full Maleficent review please check The Good The Bad The Ugly Film Show Ep #81