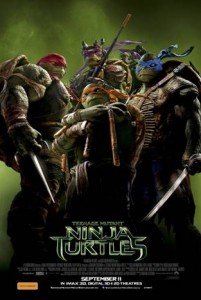 Summary: From their home in the storm sewers of Manhattan, four Ninjitsu-trained turtles, Leonardo, Raphael, Michelangelo and Donatello and their sensei, Master Splinter, battle evil.

Nick Gardener: You can check out Nick’s Teenage Mutant Ninja Turtles review on The Good The Bad The Ugly Film Show Ep #96

Turtles fans beware Michael Bay is seeking to destroy your childhood the way he did for fans of the Transformers. That seemed to be the warning going around when it was first heard that Bay was set to be the producer of the re-boot of the popular Teenage Mutant Ninja Turtles franchise. But perhaps the warning went out a little bit early because there is more than enough to like about this latest superhero film.

Maybe to appease the true Turtles fans but the plot here not only calls upon the stories of the popular Teenage Mutant Ninja Turtles series but also the popular comic book series. The film beings with New York City coming under attack by the evil Shredder (Tohoru Masamune) and his Foot Clan Soldiers. Now while most journalists are dismissing the so called Foot Clan the determined April O’Neil (Megan Fox) is doing all she can to prove their existence so she can finally become what she has always dreamed of… a crime reporter.

Her bid to find the truth though soon uncovers something else that New Yorkers should probably know about. The existence of some heroes, namely some teenage mutant ninja turtles known as Raphael (Alan Ritchson), Michelangelo (Noel Fisher), Leonardo (Pete Ploszek/Johnny Knoxville) and Donatello (Jeremy Howard). These hard-shelled heroes are breaking all the rules set by their master, a mutated rat named Splinter (Danny Woodburn) and are doing all they can to help protect the city.

Now the first thing you will notice about Teenage Mutant Ninja Turtles is that it is nowhere near as good as the recent Dark Knight trilogy or even most of the Marvel films, but the film still has its credits. Despite fears to the contrary the screenplay does allow for some characterization of each of the turtles (something that wasn’t the case for the robots in Transformers) while director Jonathan Liebsman does deliver some pretty intense action sequences, although that is only to be expected seeing he was the man at the helm of Wrath Of The Titans and Battle Los Angeles. The scene of the turtles, April and Vernon (Will Arnett) crashing down the side of a mountain in a truck while battling Foot Soldiers is a pretty decent scene, while Liebsman’s direction is aided by some pretty nifty special effects that bring the turtles to life.

As would be expected though the hand of Michael Bay is firmly over this film. There are a lot of loud noises and close ups of Megan Fox’s assets just as Mr. Bay likes it and while you can easily defend the much maligned storyline of April once being the owners of the turtles and Splinter by highlighting that happened in the comic book series it is harder to defend the ending of this film. Like it or not but Splinter’s grand plan at the finale of this film is way too close to what we have already seen in The Amazing Spider-Man as Dr. Curt Connors (aka The Lizard) tries to bring about his Armageddon.

Teenage Mutant Ninja Turtles also seems to be damaged by some of the re-writes that the film went through. From the background ‘trained in Asia’ story set-up of Eric Sacks through to the fact that he is never seen in a scene alongside Shredder in full uniform it is obvious that at some point in this film’s production Sacks was supposed to be Shredder, which actually would have worked very well. The most obvious reason for changing that is it may have been too obvious, but hey when you have William Fichtner turn up in a film your audience is already going to be expecting for him to be playing a bad guy anyway.

As far as the acting goes no-one is in any danger of being a threat on Oscar night. William Fichtner and Will Arnett both breeze through their clichéd performances while Whoopi Goldberg’s role is almost blink and you’ll miss it. Megan Fox does enough to silence her critics, she’s not as bad as everybody was expecting her to be, but again she hasn’t been given anything gritty to work with either.

If you’re prepared to walk into Teenage Mutant Ninja Turtles and just expect a fun action film then you aren’t going to be disappointed. The film does its best to appease both fans of the comic book series and television show but the question must be asked which demographic is this film aimed at. The current series of Teenage Mutant Ninja Turtles seems to be aimed at younger kids but most of the humor and violence of this film would suggest that it has been aimed at an older audience. Still Turtles fans can breathe a mild sense of relief, at least it didn’t turn out to be as bad as some of the later Transformer films.