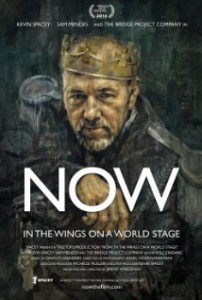 Kevin Spacey invites film buffs and theatre goers alike to share his remarkable journey when he and fellow Oscar winner Sam Mendes toured the world with their staging of “Richard III” – in a fascinating, 90-minute documentary titled “NOW:  In The Wings On A World Stage”, in selected cinemas from December 4, through Umbrella Entertainment.

Directed by Jeremy Whelehan and produced by Spacey, the feature length documentary reveals intimate moments behind the scenes moments as Spacey, Mendes and a troupe of over fifty go on the road across three continents over ten months, staging over 200 performances of the Shakespeare classic.

For those who have never seen Kevin Spacey on stage, his interpretation of Richard III is an absolute treat.  “NOW:  In The Wings On A World Stage” gets up close and personal with Spacey and a theatre company consisting of actors from various walks of life on their travels, from Epidaurus to Istanbul, from San Francisco to Sydney, the play unfolds in excerpts as the fate of the king is revealed.

This production of “Richard III” was part of a larger endeavor called The Bridge Project, born out of a simple desire – a wish for artists, collaborators and audiences on both sides of the Atlantic to experience one another’s work, talent and artistry in the theatre.

“There are a multitude of challenges that come with being in a new theatre in an unknown city every few weeks. There were some tears and a lot of laughs. We became a family by sharing unforgettable moments, practicing our craft across three continents over 10 months of time…The success of the project was beyond my highest hopes.” – Kevin Spacey

Tagged: Kevin Spacey, Now: In The Wings On A World Stage, Sam Mendes