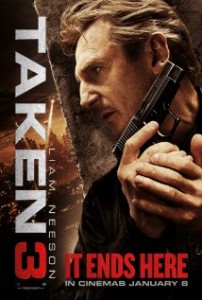 Summary: Bryan Mills (Liam Neeson) is back, not because someone has been taken but instead because he has been framed for the murder of his wife, Lenny (Famke Janssen). Not only does he want revenge but he also needs to find a way to clear his name.

Bryan soon finds that the only people who believe that he is innocent are his former CIA crew and his daughter, Kim (Maggie Grace). Worse still it seems like a dogged and determined cop, Franck Dotzler (Forest Whitaker) is determined to see Bryan go down for the crime.

The original Taken film, that surfaced in 2008, was rightfully labelled as one of the best action films to ever be made. It was tightly directed by Pierre Morel who did a great job creating a stylised yet believable action classic while announcing that award-winning actor Liam Neeson was a more-than-worthy action hero, ironic when you consider that Neeson had previously turned down the role of James Bond by saying he never wanted to be in an action film. The one of things that quickly gained Taken a legion of fans though was the fact that it had something that action film buffs had been craving for quite a long time… brutality.

Then came Taken 2 directed by French director Olivier Megaton, a film that was so eagerly received by fans of the original film due to the fact that it was heavily edited in a bid to try and soften the violence and asked the audience to suspend their belief just a little too far. Now comes Taken 3 which again sees Megaton at the helm and the result is an entertaining but completely over the top action film that could potentially have fans of the first film really cringing.

The biggest fault with Taken 3 is that the film’s believability goes out the window very early on. If the fact that Bryan could never have been blamed for Lenny’s death due to the fact that he would have had an alibi to place him away from the scene of the murder isn’t enough to make the audience groan then Taken fans will be completely surprised when they discover that this time around Bryan is no longer just simply a man with a special skill set, somehow in this film they are expected to believe that he has suddenly become super-human. Yes suddenly Bryan has the ability to survive explosions and incidents as if he is some kind of immortal… it just doesn’t work within the realm of this franchise. Plus the audience is also expected to believe that a large amount of collateral damage deaths of innocent bystanders (for those that have seen the film think back to the freeway) is justifiable became one man wants revenge for his wife’s death and to clear his name… it’s just not something that is going to sit right with most people.

Then there are also the faults with the filmmaking and screenwriting themselves. Megaton delivers fast paced action that seems to have been learnt from the Michael Bay School of Filmmaking, lots of quick camera shots and movement that seem to hamper the film more than making it easy to watch, add that to the fact that the screenwriting is just lazy and you have a recipe for disaster. The screenwriter seems to have thrown all matter of Police procedure out the window while making any character that isn’t Bryan or his family into a one-dimensional walking cliché. Yes this is one of those crime thrillers with buffoon cops with the same personality trait and incompetence everywhere you turn.

The weak screenplay certainly affects the performance of Forest Whitaker who is held back by the fact that he seems to be playing the same OCD suffering, obsessive cop that he played while chasing Vic Mackie in The Shield. To a cinema fan it is actually sad to see such a talented actor, like Whitaker, wasting his talents playing such a cliché. The rest of the cast seems to suffer as well. As usual Liam Neeson steps up to the plate as the action hero, but he like his on-screen daughter, Maggie Grace, seems to just breeze through most of the film’s so-called dramatic scenes with complete ease.

The other piece of strange casting in Taken 3 that will potentially annoy true Taken fans is the casting of Dougray Scott as Stuart St. John… Lenny’s husband. Not only does he play another cliché… this time the token bad guy, but looks a hell of a lot younger than the original Stuart (played by Xander Berkeley) that we saw in the original film.

Strangely though despite all its weaknesses Taken 3 isn’t a dull watch. If you like car chases and explosions this film will be entertaining enough for you from start to finish. But if you’re looking for an action film with substance, like the first film was, then give this film a wide berth because substance and believability are just things that aren’t in Megaton’s film-making repetiteur.

Other Subculture Entertainment Taken 3 reviews: You can also read our review on The Book The Film The T-Shirt.