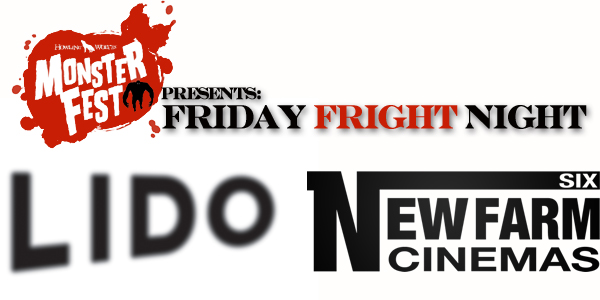 Monster Fest, Australia’s premiere cult film festival is proud to announce a weekly program of cult screenings at two of Australia’s finest cinema establishments, the brand new Lido Cinema in the Melbourne suburb of Hawthorn and the recently revamped, New Farm Cinema in the Brisbane inner-city suburb of New Farm.

MONSTER FEST PRESENTS: FRIDAY FRIGHT NIGHT will showcase a depraved cavalcade of the latest, greatest and rarest cult and horror cinema from Australia and around the globe.

There will be world premieres, local premieres, reruns of classic gems as well as rarities that may never have been seen on the big screen in Australia before.  Where possible the screenings will involve special guests, either live at the cinema or via Skype hookup – actors, directors, writers and artisans from every cinematic walk of life.

“This is perhaps the most exciting development in Monster Fest’s history” said Monster Fest National Marketing Director, David Leadbetter. “To have two of the most spectacular cinema’s in the country regularly screening some of the scariest, nastiest and downright depraved films ever made, all under the Monster Fest banner, is a dream come true and should have cult movie enthusiasts salivating like rabid zombies” he continued.

The full program of Friday Fright Night films is currently being finalised and will be revealed shortly.

“There are so many incredible films being released in this country that never get seen on a big screen, these Friday Fright Night screenings will change that and will give genre freaks like me a reason to live” said Monster Fest Presents Curator Ben Hellwig, “We want this to be an all out celebration of cinematic depravity and for it to lure the genre loving throngs of this country back to the cinema where they belong, cult, think cult cinema, think Monster Fest Presents” he continued.

The Friday Fright Night screenings will launch with the third installment of the most controversial film franchise in the history of cinema, THE HUMAN CENTIPEDE 3 (FINAL SEQUENCE) and the star of parts 2 and 3, British actor Laurence R. Harvey, will be on hand to partake in Q&A’s and signings post screening.

Friday Fright Night screenings will continue every Friday from launch.