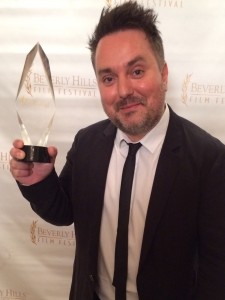 Coming up for its second week in selected cinemas in Sydney, Melbourne and Adelaide, ONE EYED GIRL will soon be seen in Hobart and Darwin (dates and cinemas to be advised).

ONE EYED GIRL – written by Nick Matthews and Craig Behenna and directed by Nick Matthews – is a gripping story about a psychiatrist, haunted by the death of a former patient, who stumbles upon a Doomsday cult and battles to save a teenage girl from its clutches.

On winning the award, Nick Matthews said, “What a thrill, to have competed here in the heart of filmmaking and then to be recognised like this. I’m so proud of all the cast and crew and I thank everyone who supported us along the way. I’d like to think this win may mean we can share the film with a wider Australian audience.”