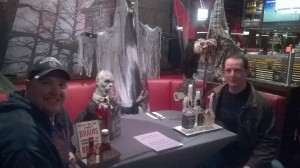 After years as a devoted listener of radio station RRR and its legendary programmes such as “Fast Fictions” and “Danger Low Brow”, Nick decided to try his hand at presenting a music, film review and popular culture show.  That programme was “Built for Speed” which has aired every Friday night from 8-10pm on 88.3 Southern FM for over 18 years.  On “Built For Speed”,  Nick and co-presenters CJ and Jim review new release films, play a mix of new and old alternative music and direct a critical (and hopefully amusing) eye at all things pop cultural.

In 2012, Nick teamed up with three of Melbourne’s finest film reviewers: David Griffiths, Greg King and Adam Ross, to present the weekly podcast “The Good the Bad and the Ugly”.  The podcast is all about movies with the team reviewing the week’s new cinema releases and DVD’s and diving into the history of film with their weekly and highly contentious discussion point.

Nick can also be heard reviewing new release movies at 7:30am every Wednesday morning on “The Wednesday Motley Crew” a programme presented by the aforementioned Dave, Greg and Adam on 3WBC 94.1FM Whitehorse Boroondara Community Radio.

Over the years, Nick has also contributed film, gig and CD reviews to publications such as Inpress magazine, The Weekly Times and The City Weekly.  In addition, Nick, CJ and Jim were regular presenters on RRR graveyard shifts and filled in for numerous specialist music shows on RRR.