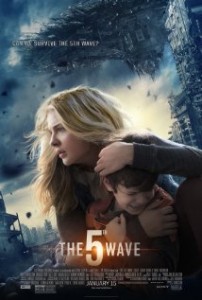 Summary: Based on the hit novel by Rick Yancey The 5th Wave sees teenager Cassie Sullivan’s (Chloe Grace Moretz) world get turned upside overnight. One moment she is your typical partying High School student who has a crush on classmate Ben Parish (Nick Robinson) and the next moment everything changes as an alien race known as The Others begin four waves of attack on Earth.

Soon Cassie finds herself in a desperate bid to survive while trying to find her brother, Sam (Zackary Arthur) who has become separated from her and is now in the so-called safe hands of the military. But Cassie knows that nobody or nowhere is safe anymore and she will do anything to get back to her brother.

OUR THE 5th WAVE REVIEWS & RATINGS:

Hunger Games, Divergent, Maze Runner – there’s been no shortage of teen utopian flicks coming out the last few years and now there is a new kid in the playground – The 5th Wave, and boy does this kid have some bite. The 5th Wave doesn’t mess around, as some unsuspecting parents discovered in the screening I was in when they had to rush their kids from the cinemas after Chloe Grace Moretz gets shotgun friendly within the opening moments of the film. Yes this film’s a winner, but I just wish I’d had a better and longer time to get to know the characters.

Don’t get me wrong The 5th Wave delivers on all cylinders, in fact it has everything that a movie like this needs. The problem is that the story and the characters are so interesting I wanted to spend longer in their world. Instead of a two hour movie I would much rather have seen Cassie and her family put through trials for a longer period of time and had this become a television series that I could enjoy alongside The Walking Dead and Under The Dome. The first four waves of the attack happen so quickly in the film it seems the only way to do it true justice would be to have it happen over two or three seasons of a show.

Still credit needs to be paid to The 5th Wave as a film. Director J. Blakeson knows how to deliver suspense, he did it by the bucket loads in the haunting The Disappearance Of Alice Creed and here he teams up with a talented screenwriting team that among others features the talented Akiva Goldsman (yes the genius that brought us I Am Legend). Together these two set about making this film enjoyable for the same reason we loved Maze Runner… because they don’t hold back and as a result the story is more believable. Believability was really on their side as Cassie isn’t based in some far off world, her world is our world just with some alien attackers added. Blakeson and co then brilliantly have her face decisions that many of us would struggle to comprehend and the result is a film that has you on the edge of your seat throughout. Once the twists and turns start occurring in the plot you never know what is going to happen next.

The other thing that makes The 5th Wave work so well is that all the characters are relatable. Cassie isn’t your superhero archetype, instead she is the girl next door who suddenly finds herself having to fight for survival. Her instinct of wanting to protect her family is something that we all identify with and the audience very quickly finds themself ‘barracking’ for her. Sadly that same feeling takes a bit longer to generate with Ben as he missing for a huge part of the middle area of the film… still he is likable enough for it to come back and it would have been nice to have been able to spend more time getting to know him as a character.

The well written script and good direction from Blakeson also allows the young stars to shine. Chloe Grace Moretz is her usual stand-out best but unlike her role in Kick-Ass we do get to see a much softer side to her this time around as well. She is well supported by Nick Robinson and also Alex Roe who both announce themselves as stars of the future. A gruff performance by Liev Schreiber is also worth mentioning as he is at his menacing best.

One of the saddest things about writing this review is that I can’t tell you the real reason for why I loved The 5th Wave so much and that is for the twisted elements that exist due to the film’s plot turns and revelations. The 5th Wave is a good action sci-fi that has a little more bite than some would predict. Easy-to-warm-to-characters and an interesting storyline means the audience quickly feels part of this new world… so now we can only hope that this spins off into franchise so we can spend a little more time watching Cassie and co go up against The Others. Bring on number 2 please.

The 5th Wave, Directed by J Blakeson is a film adaptation from the popular novel written by Rick Yancey.

The 5th Wave is the story of an alien race, known as The Others, coming to Earth and trying to claim the planet as their own. The Others attack Earth in a series of waves. The 1st Wave, lights out. All electrical appliances and vehicles are terminated from being able to be used by mankind. The 2nd Wave, Surfs Up. This wave involved tsunamis and flooding to occur all over the world and killing millions. The 3rd Wave, Pestilence. The Others increased the effects of the bird flu and infected the whole planet ridding Earth of those who were left, those who caught it at least. The 4th Wave, They Arrive. In this wave The Others come to Earth in human form and try to gather up the last remaking human’s by impersonating the Army. The 5th Wave… This is what the whole film is based around. Trying to stop the 5th wave from happening.

During the film I loved the acting by some of the cast members and I loved the aspect that Humans are so delicate and vulnerable to so many things and how the aliens used our vulnerabilities to kill us. The story itself was a good story. I felt as though it was dragging on a little bit towards the middle of the film but that’s just my personal opinion. Once a few plot twists were presented to the audience things really picked up in my opinion. Being the School holidays this is a great film to take the whole family to. Action, drama and romance are all included writhing the film so I think there should be an aspect of the film that everyone will enjoy.