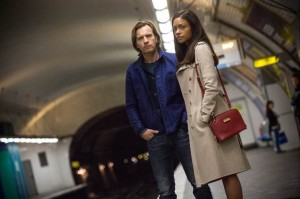 The Our Kind Of Traitor trailer has just been released.

The film sees a couple on  holiday in Marrakech. The ordinary English couple, Perry (Ewan McGregor –THE IMPOSSIBLE, THE GHOST) and Gail (Naomie Harris – SPECTRE, SOUTHPAW), befriend a flamboyant and charismatic Russian, Dima (Stellan Skarsgård – AVENGERS: AGE OF ULTRON, THE GIRL WITH THE DRAGON TATTOO), who unbeknownst to them is a kingpin money launderer for the Russian mafia.

When Dima asks for their help to deliver classified information to the British Secret Services, Perry and Gail get caught in a dangerous world of international espionage and dirty politics. The couple is propelled on a perilous journey through Paris and Bern, a safe house in the French Alps, to the murky corners of the City of London and to an alliance with the British Government via a ruthless and determined MI6 agent (Damian Lewis – HOMELAND).

The film hits cinemas on the 11th August.