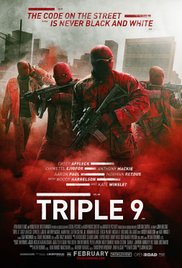 Thanks to our friends at Roadshow we can now officially launch our Triple 9 giveaway. Are you dying to see the new crime thriller directed by John Hillcoat and starring a cast including Aaron Paul, Kate Winslet, Norman Reedus, Casey Affleck, Woody Harrelson, Chiwetel Ejifor, Gal Gadot, Teresa Palmer and Anthony Mackie?

Then take a listen to this week’s episode of The Good The Bad The Ugly Film Show and simply answer the question asked in a private message on either our Facebook or Twitter pages. Please make sure though that you can attend our exclusive screening of Triple 9 on the 1st March @ 6.30pm in Melbourne before entering.

Triple 9 will be released on the 3rd March.