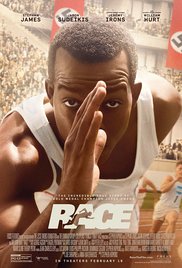 One of the most eagerly anticipated films of 2016 is Race, the film that explores the life of Olympic athlete Jesse Owens. With the film set for release in Australia later this year Subculture Entertainment’s Dave Griffiths sat down and had a chat with one of the stars – Chantel Riley. Here is our Chantel Riley interview.

First of all Chantel let me say thank you so much for agreeing to do this interview.

1. You’ve probably heard this question a million times but you have been in Broadway production of Lion King for a number of years now were you a fan of the movie before you got the role? What are your memories from watching the film the first time?

Yes I was definitely a fan.THE LION KING is one of my favorite films. I can remember watching that movie over and over again while reciting the lines along with the character.

2. You are originally from Canada, how did you first become involved with the production of The Lion King in Germany?

Disney Theatrical holds auditions for The Lion King production all over the world. So, they stopped in Canada and had an open casting call in Toronto. That is where I auditioned and later was asked to fly to Germany and become a part of the company there.

3. You get the unique opportunity to play a lion (Nala) in The Lion King, most actresses/actors only get to voice an animal character so what it is it like to play a lion? Did you approach the role differently to how you would have approached most roles?

When I first started the show it was challenging. I had to train and rehearse movements that were foreign to me. So naturally a role like Nala would have to be approached differently compared to others I have played or auditioned for in the past. Nala is a princess who later becomes queen. She is very statuesque and carries a presence. Also, shes very physical. So I have to always keep in mind while I’m on stage to not drop thise very important aspects of who she is. She is an animal so I am constantly reminding myself to move like one.

4. When did you first become interested in acting? Were you always in school productions etc when you were at High School?

I got interested in acting when I was about 22 or 23 years old. I had been singing in my church and was involved in Christmas and Easter plays. It wasnt until I saw the touring company of The Color Purple, that I discovered acting was what I wanted to do.

5. Tell us a little bit about your brand new film Race, how did you first become involved with the film?

I have an agent who sends me auditions. So when RACE came around I got interested and knew it was something I wanted to be a part of.

6. Could you also tell us a little bit about your character Quincella Nickerson? What is she like to play?

Quincella was lnown as a socialite. She was very interested in sports and a huge fan of Jesse’s. They mey in Los Angeles while he was in town for a track meet. The two got really close and even caused a little commotion that would start a rumor about their relationship.

7. The Jesse Owen’s story is one that has known right around the world, how much did you know about the story before you read the script for Race? What did you learn from the script that you didn’t already know?

I knew that Jesse was a famous track athlete that won multiple gold medals. I was able to learn more about Jesse and his struggle. As an African – American it was a huge challenge to be accepted in that time and Jesse had to ignore all of it to run for gold.

8. How does it feel being in such an important film?

It is truly a blessing. It feels surreal. Lol

Stephen was amazing to work with. He is a wonderful director. Stephan and I are from the same city so it was great being on a set with people thay can relate to you. It was like being back home. Unfortunately, I did not get to have any scenes with Mr. Hurt or Mr. Irons but their performances were great.

10. For all the young actors/actresses out there reading this what were the biggest differences you found between theatre acting in The Lion King and then doing acting for screen with Race?

My biggest challenge was internalizing. On stage we have to be open, loud and expressive. Being on camera is very intimate.

11. Do you have any upcoming projects that you would love to tell us about?

I have been working with an amazing friend of mine named James Brown – Orleams.  We have worked on a couple projects together that are indie films. I hope to do more work with him.

Again thank you Chantel for agreeing to do this interview.