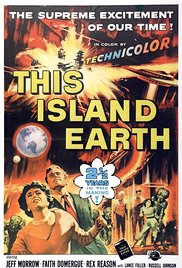 Summary: Aliens come to Earth seeking scientists to help them in their war.

OUR THIS ISLAND EARTH REVIEWS & RATINGS:

This Island Earth is a technicolour movie released by Universal International, directed by Joseph M. Newman and produced by William Alland. It was written by Franklin Coen and Edward G. O’Callaghan, based on the novel by Raymond F. Jones.

The story follows Dr Cal Meacham (Rex Reason) as he works on electronic applications of atomic research. After mysteriously being saved from crashing his jet, his laboratory receives new components for his equipment that are more advanced than anything he’s seen before, along with a catalogue of further products. He orders more of the strange components to build a previously unheard of device, the Interocitor Machine. The parts arrive with no request for payment and upon building the machine he receives a communication from a man named Exeter (Jeff Morrow) who invites him to join a secret research and development group. Curious, Cal accepts the request and soon finds himself in a world of suspicion and interplanetary events, aided by Dr Ruth Adams (Faith Domergue).

What begins as an engaging mystery leads further and further into a story that eventually goes nowhere, with questions and plot threads somewhat left unanswered. As an adventure in its own right the film is enjoyable, but not enough was made of the ultimate events of the film – especially the journey to the alien world of Metaluna.

We are engaged enough to follow our protagonists into their mystery and then into an intergalactic journey, but in the end the conclusion is rushed to the point of the whole trip being pointless. Having not read the original novel I do not know how this film stands against the original story, but I will be interested to find out.

As we progress through the story we find that an apparent enemy is, instead, someone we’re supposed to sympathise with; a hard task after they have just murdered several people to cover their tracks and hunt down our protagonists (who they were also about to kill but suddenly do not). These flaws are a shame as the film really builds the mystery, suspense and tension well.

The direction and cinematography are strong, with lighting and colour effects added to imbue alien qualities to otherworldly environments and enhance special effects. I am happy to say that the special effects were not over-used as some of the death-ray beams, while nicely styled to convey motion and impact, might eventually detract from the overall cinematic quality.

Some of the earlier scenes could have used tighter framing of shots in order to cut-up the, then-typical, mid-shots. This is forgiven when we see the filmmakers’ use of epic wide-shots to convey space and describe new environments, such as the war-ravaged surface of Metaluna and the interior of the giant flying-saucer.

The design and effects teams should be applauded for the creation of Metaluna, both from space and on its surface. The ‘ionization-layer’ around Metaluna helps to create a splendid looking planet (far better than the ‘plastic-looking’ planet Earth we leave behind). On the battered surface of Metaluna we get a sense of scale and a smoking, barren land of rock over some well-achieved alien cities. The painted backdrops and interestingly-framed shots help to convey an exciting new world which was, unfortunately, underutilised in the end.

The design of the Metalunans’ mutant servitors was another success, creating something new and wholly alien and increasing the immediate sense of threat for the protagonists and audience. Perhaps the only let-down was the actors’ somewhat awkward attempts to move in the costumes, but thankfully the shots were edited economically to maximise the presence without damaging credulity. It is a shame more was not made of these ‘monsters’.

The special and film effects were done well and the additions of lighting and Technicolor work really helped to make the effects eye-catching. The decay effect of a dead mutant was well achieved this way, overlaying different filmed layers with effects; as were the effects of the special pressurisation tubes the protagonists used to prepare them for the pressure differences of Metaluna (textured overlays, with some images of the human skeletal structure for good measure).

Unfortunately, the threat of the Zagon invaders bombarding Metaluna is never fully realised by showing them up-close. All we see are starships guiding meteors for use as missiles to bombard the planet. This feels a little bit wasted as we are expected to sympathise with the Metalunans, but the only constant threat seems to come from them and not the Zagon, whom they need help against.

This is a technically impressive and visually appealing adventure film, but would have benefited from further plot and character development (especially to show where Exeter stands in the conflict and to how Ruth and Cal empathise, or not, with their captors).

Overall, I give this film 3 out of 5 for high production levels and entertainment.