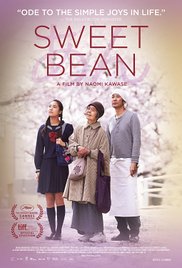 Summary: The manager of a pancake stall finds himself confronted with an odd but sympathetic elderly woman looking for work. A taste of her homemade bean jelly convinces him to hire her, which starts a relationship that is about much more than just street food.

OUR AN REVIEWS & RATINGS:

This gentle and delicate little drama from Japanese filmmaker Naomi Kawase screened at the Melbourne International Film Festival in 2016, and is now gaining a limited theatrical release. It is a deceptively charming little film that will win audiences over. The title itself An is the Japanese word for a sweet red bean paste which is one of the key ingredients of the film.

Sentaro (Masatoshi Nagase, from Jim Jarmusch’s Mystery Train, etc) runs a little pancake stall on the street selling dorayaki. A delicacy in Japan, dorayaki is essentially a pancake consisting of two small cookies filled with a sweet bean sauce. Business is rather slow until Tokue (veteran Kirin Kiki, fromLike Father, Like Son, etc), an elderly woman, applies for a job as an assistant cook. She is hired despite her crippled hands and her age. She makes her own sweet bean sauce from scratch, but it proves such a treat that soon customers are flocking to the small stand. Both have unhappy pasts and secrets, but when Tohue shares her recipe with Sentaro she helps him rediscover life. Shy local schoolgirl Wakana (newcomer Kyara Uchida) is another outsider who hangs around the shop. Together the trio bond over their love of dorayaki and their friendship changes the direction of their lives.

An (or Sweet Bean as it is known in some territories) is based on a novel written by Durian Sukegawa, and is arguably Kawase’s most accessible film. This is a low-key heartfelt and bittersweet film that centres around themes of tradition, food, friendship, loneliness, pain, secrets and second chances. Like Tokue’s unhurried approach to making her bean sauce recipe, Kawase’s direction is leisurely and sensitive. She takes her time over a lengthy sequence in which Tokue patiently makes her bean sauce.

However, the slow pace gives audiences ample time to get to know the characters and soak up the atmosphere. Kawase also suffuses the film with a warmth and gentle humour and a sentimental nature. The film’s final sequence blatantly tugs at the heartstrings.
The film is anchored by the remarkable performance of veteran actress Kiki, who brings grace and dignity to her role. Nagase brings a quietly unassuming quality to his performance as Sentaro.

An has been beautifully shot by first time cinematographer Shigeki Akiyama who gives the film an almost poetic quality. The colourful Japanese cherry blossoms which also feature prominently in the film become a potent symbol of the fleetingness of life, and the importance of seizing the moment and living in it.

Other Subculture Entertainment An reviews: You can also listen to our full An review on The Good The Bad The Ugly Film Show Ep #175.