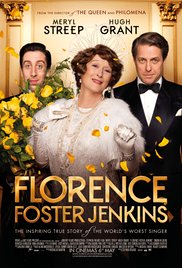 Summary: As the worst opera singer in the world, Florence Foster Jenkins (Meryl Streep) prepares to take her career to dizzying new heights a young pianist, Cosme McMoon (Simon Helberg) finds himself swept up into the world of lies that Florence’s hsuband , St Clair Bayfield (Hugh Grant), has set up in order to protect her feelings.

The world of cinema can be a strange, strange place. Whenever a film comes out I hear people talking about what demographic the film will appeal to, whether it will appeal to men or women etc. I’ve never really taken much notice of it because when it comes to films my tastes are pretty varied. While I love my horror and science-fiction I can also settle down and watch a movie meant for kids, like Monster’s Inc. and enjoy it as well. The same with movies meant for older people, take 45 Years for an example, while some said it was for older people I enjoyed it to the point where it has been one of my favourite films of this year.

But now comes a film that is making me re-think whether some films are meant for different ages, and that film is Florence Foster Jenkins. Now I’m not going to sit here and say I hated the film because I didn’t. For me it was just a mediocre film, it didn’t bore me but it didn’t exactly have me labelling it a classic either. What did surprise me was the comedy aspect of the film. Sure the first couple of times Meryl Streep (The Devil Wears Prada) warbled horribly as Florence Foster Jenkins I chuckled, but there were some older members of the audience I was in who laughed themselves stupid every time Florence attempted to sing. Yes it really did have that kind of effect on the older audience.

So why was Streep singing so badly off key? Because in this film she plays Florence Foster Jenkins, a real life character who during the 1940s made a name for herself for literally being a bad singer. And while anyone that every heard her would know she was a dreadful singer she was spared those details by the fact that her husband, St Clair Bayfield (Hugh Grant – Notting Hill) did everything in his power to make sure she never found out the truth. That included paying music critics and making sure anyone who ever laughed during her performances was quickly turfed out of the venue.

During the film we see Florence start off at a small level of singing for small groups of people but as she plans to take her career even further, to the point of recording a single and performing on bigger stages, she decides to team up with a young piano player named Cosme McMoon (Simon Helberg – The Big Bang Theory) who quickly finds himself having to get used to St Clair and Florence’s web of lies.

As far as the film goes despite being very light hearted in style in does get to you emotionally. Such is the power of director Stephen Frears (The Queen) and screenwriter Nicholas Martin’s (Midsomer Murders) style of filmmaking that many of the scenes of the ailing Florence really do start to get you, so much so that you do want her to be happy. That style of filmmaking also raises suspense at times when you wonder how some people will be react to Florence’s singing and how their reaction will affect her.

It is those kinds of scenes that make this film well worth watching but there are also some downsides to Florence Foster Jenkins as well, and those largely centre around a huge issue in the casting. As you would expect from a film like this Meryl Streep puts in a brilliant emotionally driven performance and while Hugh Grant does match her remarkable well for me it felt like he was miscast in the role of Florence’s husband. While the wardrobe department have done all they can to ‘age’ Grant for the role it does come across as very creepy matching at times during the film… yes almost as creepy as the pairing of Catherine Zeta-Jones and Sean Connery in Entrapment. Having said that though Grant does put in a good and charming performance, he’s just in a role that he should never have been cast in.

The other actor who really impresses in this film is Simon Helberg who most people will know as Howard Wolowitz on the successful comedy series The Big Bang Theory. Herlberg has shown throughout his television career that he has impeccable comedic timing and he certainly brings that to his character here – the socially awkward and very innocent McMoon. To his credit Helberg not only matches Streep and Grant’s performances but sometimes even manages to steal the limelight with his creative facial expressions.

Maybe I didn’t find Florence Foster Jenkins as funny as some of the other people screening that I was in but I still found it a heartfelt film that grows on you the longer it goes on.

You can hear Greg King’s full Florence Foster Jenkins review on The Good The Bad The Ugly Film Show Ep #175.