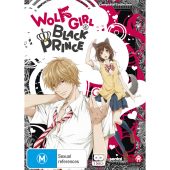 Summary: About Erika who claims that popular boy, Sata is her boyfriend. She has no choice but to make him her fake boyfriend. Unfortunately,he may look like a sweet person, but he is actually an ultra sadist and treat her like a slave.

Wolf Girl & Black Prince is a Japanese animated series, revolving around an off-beat high school romance. It is released on DVD and BluRay in Australia by Madman Entertainment.

I found this series to be an enjoyable watch despite, or perhaps because of, my constantly conflicting feelings about the main pair’s romance. This romance is centred around Erika (the lying ‘wolf-girl’) and her ‘black prince,’ Kyoya.

What, at times, seems like an abusive relationship (or, at least, a pretend relationship) is complicated by sudden glimpses of care and sweetness throughout that keep you building hope in a happy outcome; just as Erika does as she realises the truth of her feelings and confesses her love to Kyoya.

By raising these conflicting feelings within its audience’s minds the story successfully manages to put us in Erika’s place. At times we want her to just end it; it’s a ridiculous situation to be in. And then we suddenly think that there’s more to it, and more to him, and maybe we want to give him another chance…

It’s just like a relationship – especially one that may not be good for us. Still, you do have to wonder why Erika does put up with it and this could be a question that makes you wonder if you want to keep watching once you are past the halfway point and our protagonist is still putting herself through emotional heartache.

However, the truth of the situation is that Erika constantly lands herself in the thick of it with her lies and exaggerations but ends up finding numerous friendships – which is what she set out to do in the first episode of the series as she starts her first day of high school. Find rewards like this is what really makes the show attractive and enticing.

A great array of supporting characters and interrelationships are shown throughout the series. Some characters could have benefited by more screentime, or a longer series, but as the story is Erika and Kyoya’s relationship this would have been extraneous to the main plot and dragged out the painful parts of the relationship to the point where you would probably stop watching.

A lot of time is spent hoping for more details into Kyoya’s past and reasons for his actions which  are hinted at but held very close to the chest until the end, unfortunately. It would have been nice to put a bit more of this information in along the way, but it is worth pursuing to the end to get more pieces of the puzzle, despite the harder moments of character ‘sadism’ in the series.

This DVD is only presented in the original Japanese audio with English subtitles (which I prefer, anyway). The characters work with suitable voices that fit the usual archetypes and stereotypes, setting suitable tones for each moment of drama, humour, romance and so on. It is this voice work and the additional characters that keep the entertainment going and lighten the more emotionally draining moments.

This is a well-made series, done in the typical style with the primary focus on exaggerating Erika’s rollercoaster of emotions and highlighting important moments such as the flashbacks to Kyoya’s childhood.

I like that the production team did not resolve every little thing for each and every character, as this is how it is in real life. Despite some heightened drama, you walk away believing in the relationships and characters’ personal / internal dramas; like a window into a single chapter of someone’s life.

Focus is given to the romance and relationships and getting that to a certain point without wholly and conveniently fixing everything in everyone’s lives.

This is a ‘lite’ DVD set, with the only features being the usual textless opening and ending credits. I like this, however, as the theme tunes got stuck firmly in my head. Being a short, complete story I did not feel the set suffered from not having further features, as the real experience is the story itself.

This series is available in stores now from Madman Entertainment.