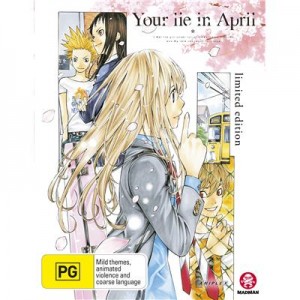 Summary: A piano prodigy who lost his ability to play after suffering a traumatic event in his childhood is forced back into the spotlight by an eccentric girl with a secret of her own.

OUR YOUR LIE IN APRIL VOL 1 REVIEWS & RATINGS:

Your Lie In April is a Japanese animated series, based around a coming-of-age / first-love story intermingled with competitive musical ambitions. Volume One is released on DVD and BluRay in Australia by Madman Entertainment.

This series hits with immediate impact. The first thing we see is a girl, Kaori, following a cat around. This is both endearing and amusing but also features some interesting animation that already raises expectations on the quality of the series. We cut to the titles and are treated to yet another catchy theme tune – Hikaru Nara by Goose House.

Soon after, we are treated to exceptionally animated sequences done with 3D models and rotoscoping and sharp camera movements. This really livens the scene and makes it present, even as we will see sweat fly off of characters as they perform with all their might. These sequences become something you eagerly await throughout the series as they are so passionate and reflect the power of the music being played. Artistic licence is taken to colour and light the scenes so that you can follow what is happening to the colours emotionally and mentally.

In a word: impeccable.

This is one of the most engaging stories I have been privileged to watch, filled with identifiable characters and relationships. I wept several times – particularly during concert scenes where characters’ emotions come out in their music. That said, this is a complex and emotional story where layers are peeled off piece by piece, with foreshadowing of what is to come reflected in what has already been.

I have not been touched by or connected with a story so instantly as I have with this one.

Plenty of anime humour and dynamics are used throughout the story to even out the emotional intensity and balance out the high quality animated sequences. This is as much to keep the series to a deadline and budget as much as it is to entertain and not overwhelm the audience.

The characters were recognisable instantly and initially laid out simply, but layers of details and dimension show more and more with each episode. Arima Kousei is the voice and heart of the series and I could connect instantly and even see a mirror for myself. This is a highly immersive experience.

The voices are very suitable but also have that typical anime feel, but this is good to heighten things a little and ad the entertaining elements as counter for the highly internal and reflective feel that marks this series.

The production is an interesting blend and this is set-up in the first episode (showing the different elements and styles involved throughout the story). Character movements seem real, which are then raised with CG / rotoscoping for the intense musical performance scenes. Again, this is countered by the heightened moments of manga-style humour and exaggeration to lighten the drama. Beautiful music and imagery throughout the show keep you locked into this world; transfixing.

This DVD set, being only the first half of the series, is not over-endowed with features. The usual textless opening and ending credits are included (which is fine, as I had Goose House’s theme stuck in my head, and now have it on my phone). These sequences are actually quite a joy to watch in themselves, so it is forgivable not have more features included as the real experience is the story itself.

However, this leaves me really eager to see volume two and I, for one, cannot wait to grab it up as soon as I can!

I highly recommend this series, with 4.5 out of 5 stars.

(Mind you, I may only have taken half a star off as I’m dying to see the rest of the show!)

Other Subculture Entertainment Your Lie In April Vol 1 reviews: Nil.