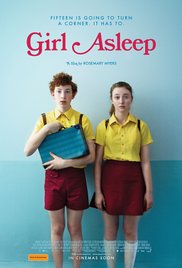 Girl Asleep is the film adaptation of Windmill Theatre’s critically acclaimed coming of age play of the same name, written by Matthew Whitten. It has been described as Napoleon Dynamite meets Where The Wild Things Are crossed with the magical fantasy world of Alice In Wonderland. As part of our MIFF coverage, Greg spoke to director Rosemary Myers about bringing the play to the screen.

Girl Asleep premiered at the Adelaide Film Festival and has travelled the international film festival circuit to great acclaim. It screens at Melbourne International Film Festival on Tues Aug 9 at 6.30 @ Hoyts Melbourne Central. Rosemary and some of the cast and crew will be in attendance for Q&A session after the screening. Girl Asleep hits cinemas on September 8.

You can listen to or download our Rosemary Myers interview right here.