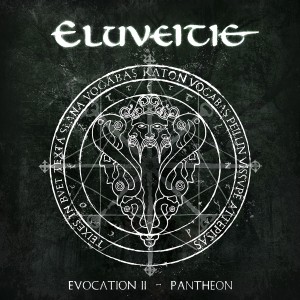 It’s not many bands that can boast that their latest album is 2,000 years in the making… nor can many say that their album had to have the help of scientists and history professors when it came to the lyric writing – but that is exactly what has happened with Swiss Folk Metal masters Eluveitie. While putting together an album that meant spending countless hours with professors of language and the like sounds like an ordeal upon itself the band also had to deal with the fact that three members had left the band to form Cellar Darling while five new members joined the band (four were returning after a brief hiatus) including a new clean vocalist Fabienne Erni.

Fans of Eluveitie at their most extreme should be warned that Evocation II: Pantheon does fall more on the side of folk than does to metal – largely due to the fact that the band have chosen to not only record the album in the Gaulish language but also because they have chosen to record with the instruments that were around 2000 years ago. The result is folk music written as it was intended but with the power of a metal band… and it is one of the best things I have heard all year.

The emotions that Eluveitie manage to conjure up during this album really does show that true emotion in music comes through the music itself and not through any digital enhancements that can be done using computers and such. The atmospheric feel of tracks like ‘Belenos’ show the true skills of Eluveitie, while the infusion of a true tribal and haunting feel of ‘Catvrix’ and ‘Esvs’ is a true beauty that will stick with the listener.

The metal grunt of Eluveitie comes to the fore with the faster paced tracks – ‘Lvgvs,’ ‘Taranis,’ ‘Nantosvelta’ and ‘Cemvnnos’ – but is the fact that slower tracks – ‘Artio,’ ‘Aventio’ and ‘Antvmnos’ – work alongside other tracks of spoken word that really show that Evocation II: Pantheon truly captures its audience. Of course the most amazing track on this album is lead single ‘Epona’ which for me is one of the best songs of 2017, the instrumentals behind it are amazing while on the album it serves as a great introduction to the vocals of Fabienne Erni. Her amazing voice really comes through on the track and throughout the album you are constantly reminded of what she know brings to the future of Eluveitie.

Evocation II: Pantheon is truly a masterpiece. Close your eyes while listening to this album and you are transported back to the Celtic times of 2000 years ago. There is a power in the music here that is rare in modern day music. Eluveitie have created a work of art with this stunningly beautiful album.