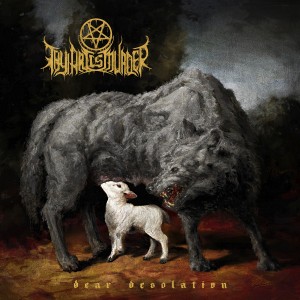 Take a bow Thy Art Is Murder because you boys have delivered one of the most brutal albums of 2017. I could use all the traditional clichés when it come to talking about Dear Desolation – it’s in your face, it’s the kind of album that your Mum doesn’t want you to listen to yada yada – but really this album is a lot more than that. Yes it’s brutal, yes it’s in-your-face but an album this unrelenting is extremely rare.

Opening track ‘Slaves Beyond Death’ doesn’t just start playing when you hit play this bloody thing erupts and explodes from your speakers. The drumming work of Lee Stanton is off the scale and when CJ McMahon’s (welcome back to the fold, mate) suddenly hit this album goes to a whole new level. ‘The Son Of Misery’ is a wall of sound that shows that Thy Art Is Murder is a band that just continually keeps pushing the boundaries while McMahon’s vocals on the title track drift from deathcore through to manic growls.

The early instrumentals of ‘Death Dealer’ build like an air raid siren before launching into the best track of the album which has a real feel of tribal cries while that tribal sound returns on ‘Into Chaos We Climb’ which also features some fine melodic guitar sounds from Andy Marshthat sweep through the track from time to time. Marsh’s work also makes ‘The Final Curtain’ a stand-out as everything comes together while the guitars soar above them all.

The wall-of-sound element that Thy Art Is Murder manage to achieve with Dear Desolation is nothing short of amazing. The sheer brutality of tracks like ‘Man Is The Enemy’ is rare while the creativity that allows the band to let ‘The Skin Of The Serpent’ and ‘Fire In The Sky’ just build and build until they reach new epic heights of deathcore separates this band from the pretenders once and for all.

Dear Desolation is the pinnacle of deathcore music. While people in the past have compared Thy Art Is Murder with bands like Behemoth and Cannibal Corpse this album plants them in that exclusive club right beside them.
Rating (out of 5):

Tagged: Thy Art Is Murder